My Back Pages: Reviews and Essays (Paperback) 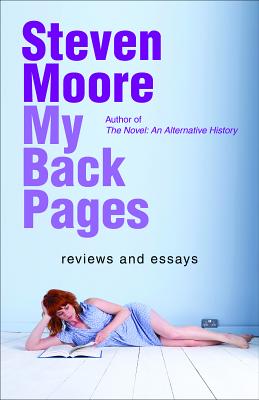 My Back Pages: Reviews and Essays (Paperback)

"Steven Moore attained literary stardom when he helped rescue William Gaddis' The Recognitions from obscurity. His fame was guaranteed in literary heaven when he helped David Foster Wallace edit Infinite Jest. Now, in My Back Pages (Zerogram Press), he has gathered his book reviews and essays that take us from the Beats and the Fifties to practically yesterday or even tomorrow." -- Michael Silverblatt, Bookworm, 89.9 FM, KCRW

" Moore] may be our country's best claim to that old-fashioned creature, 'a man of letters, ' as it is hard to imagine anyone, certainly not in the academy, who has read more widely or who could speak, if modestly, about fiction with more easy confidence, precision, and wit. . . . My Back Pages makes for joyful reading, . . . With its heft and encyclopedic range, the collection might be imagined on a scholar's shelf, and the essays will certainly be valuable to academics, but the reviews have the pleasure of love notes; they are steady reminders to us all of the necessary joy of good books." -- Julian Anderson, Fiction Writers Review

"Zerogram Press deserves plaudits for bringing out a major work of criticism. . . . Steven Moore has] read more fiction than anyone alive and writes about even the most demanding works with infectious zest." -- Michael Dirda, The Washington Post

"One of Moore's best qualities as an explicator is in communicating complex or complicated material in the clearest possible terms, and with humour when possible. . . . Steven Moore has been at the vanguard of criticism and publication of outliers and explorers whose artistic visions reinvigorate the capacious form of the novel and the short story, and we are in his debt." -- Jeff Bursey, Num ro Cinq

Before he embarked on his massive history of the novel, Steven Moore was best known as a tireless promoter of innovative fiction, mostly by way of hundreds of book reviews published from the late 1970s onward. Virtually all have been gathered for this collection, which offers a panoramic view of modern fiction, ranging from well-known authors like Barth and Pynchon to lesser-known but deserving ones, many published by small presses. Moore also reviews dozens of critical studies of this fiction, and takes some side trips into rock music and Buffy the Vampire Slayer.

The second half of the book reprints Moore's best essays. Several deal with novelist William Gaddis -- on whom Moore is considered the leading authority -- and other writers associated with him (Chandler Brossard, Alan Ansen, David Markson, Sheri Martinelli), all of which have been updated for this collection. Others champion such writers as Alexander Theroux, Brigid Brophy, Edward Dahlberg, Carole Maso, W. M. Spackman, and Rikki Ducornet. Two essays deal with the late David Foster Wallace, whom Moore knew, and others treat such matters as book reviewing, postmodernism, the Beat movement, maximalism, gay literature, punctuation, nympholepsy, and the history of the novel.

Steven Moore (PhD Rutgers, 1988) is the author and editor of several books on William Gaddis, as well as of The Novel: An Alternative History (2010, 2013). From 1988 to 1996 he was managing editor of the Review of Contemporary Fiction/Dalkey Archive Press.

Steven Moore: Steven Moore (PhD Rutgers, 1988) is the author/editor of several books on William Gaddis, as well as of The Novel: An Alternative History (2010, 2013), the second volume of which won the Christian Gauss Award for literary criticism. From 1988 to 1996 he was managing editor of the Review of Contemporary Fiction / Dalkey Archive Press, and since 2001 he has lived in Ann Arbor, Michigan.