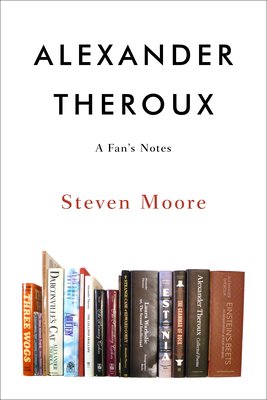 "This kind of informed appreciation of a much-maligned writer of brilliance is a treasured relief.... Moore has carried out his admirable mission of homage wonderfully, entertainingly, and decisively. It's a kinder, and much more truthful, type of criticism...." -- Greg Gerke, The Arts Fuse, 8/19/20

" This book] is passionate, intelligent, and unexpectedly honest. A responsible scholar, Moore's personal opinions and observations are always supported with convincing detail. The writer once again showcases his ability to convey an encyclopedic knowledge of literature and the publishing industry in clear engaging prose. For anyone interested in the eccentric, cantankerous, literary genius Alexander Theroux, this is the best book to get." -- Chris Via, Leaf by Leaf, 9/10/20

Since the publication of his first novel in 1972, Alexander Theroux has won great acclaim for his dazzling style and forceful intellect. That first novel, Three Wogs, was named Book of the Year by Encyclopedia Britannica and nominated for the National Book Award, as was his second novel, Darconville's Cat (1981), which Anthony Burgess called one of the 99 best novels of the 20th century. Since then Theroux has published numerous other books, won several awards, and has been the subject of academic studies and theses. In addition to Burgess, he has been praised by such writers as Saul Bellow, Guy Davenport, Robertson Davies, Fred Exley, Jonathan Franzen, William H. Gass, Norman Mailer, D. Keith Mano, Cormac McCarthy, James McCourt, Annie Proulx, John Updike, and Paul West.

Alexander Theroux: A Fan's Notes is the first book-length study of Theroux's complete body of work--novels, fables and short stories, nonfiction books, poetry, literary journalism--concluding with a chapter on his contentious relationship with his best-selling brother Paul Theroux. Critic Steven Moore, who has known Theroux for nearly 40 years and helped with the publication of some of his books, illuminates Theroux's work in a scholarly yet accessible style. While appreciative of most of what Theroux has written, Moore doesn't shirk from what he regards as some of his weaker efforts in order to provide a balanced, deeply informed evaluation of this singular writer. Moore's book will appeal to Theroux fans as well as to students of modern American literature.

STEVEN MOORE (PhD Rutgers, 1988) is the author of a two-volume survey of world literature entitled The Novel: An Alternative History, the second volume of which won the Christian Gauss Award for excellence in literary scholarship. He has also written extensively on modern literature, and for years was managing editor of Dalkey Archive Press/Review of Contemporary Fiction. His last book, My Back Pages: Reviews and Essays, was also published by Zerogram Press.