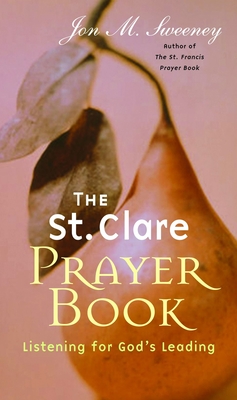 
Available in Warehouse. Wait for Email Confirmation for ETA
For all who love St. Francis and his spirit of passionate creativity and devotion to God, this prayer book is an invitation to experience the spiritual gifts of one of his closest companions. Clare was a deep, ready source of wisdom—a well to Francis's river.  Discover the spirituality of St. Clare and how it complements that of St. Francis. Enter into a week of morning and evening prayer centered on themes from Clare's life. Pray with Clare's own words in a variety of occasions. And enjoy a special appendix that dramatizes what it might have been like to be there on that first night when Clare fled to the little chapel called Portiuncula to become a brother, and much more.
Jon M. Sweeney is an author, husband, and father of four. He has been interviewed on many television programs including CBS Saturday Morning, Fox News, and PBS's Religion and Ethics Newsweekly. His popular history The Pope Who Quit: A True Medieval Tale of Mystery, Death, and Salvation was optioned by HBO. He's the author of thirty-five other books, including The Complete Francis of Assisi, When Saint Francis Saved the Church, the winner of an award in history from the Catholic Press Association, and The Enthusiast: How the Best Friend of Francis of Assisi Almost Destroyed What He Started. Sweeney is also the author of The Pope's Cat series for children. He presents often at literary and religious conferences, and churches, writes regularly for America in the US and The Tablet in the UK, and is active on social media (Twitter @jonmsweeney; Facebook jonmsweeney).
Many readers know of Francis, but fewer recognize Clare, who learned from Francis founded the Poor Clares, and became known for her wisdom. Following her conversion as a teenager, her life was a cloistered one of meditation and prayer. Much of her life she remained, by choice, behind a set of bars known as the "grille." Saint Clare lived as Saint Francis taught: "Preach with your lives, and when necessary, use words."

Readers familiar with contemplative prayer and the lives of saints will recognize the divine office as a prayer pattern, with defined times and selected readings. For each morning and evening of the week, there is a preparation, Gospel sentence, confession, psalm, Gospel reading, time of silence, prayers of the saints, and a collect. Saint Clare valued the Psalms, Song of Solomon, the prophets, Matthew, and the writings of Paul; hence, scripture selections are primarily from these sources.