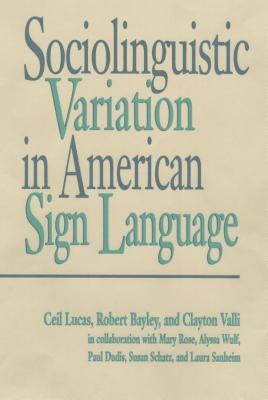 This is book number 7 in the Gallaudet Sociolinguistics series.

The culmination of a seven-year project, this volume provides a complete description of American Sign Language (ASL) variation. For four decades, linguists have studied how people from varying regions and backgrounds have different ways of saying the same thing. For example, in English some people say “test,” while others say “tes’”, dropping the final “t.” Noted scholars Ceil Lucas, Robert Bayley, and Clayton Valli led a team of exceptional researchers in applying techniques for analyzing spoken language variation to ASL. Their observations at the phonological, lexical, morphological, and syntactic levels demonstrate that ASL variation correlates with many of the same driving social factors of spoken languages, including age, socioeconomic class, gender, ethnic background, region, and sexual orientation. Internal constraints that mandate variant choices for spoken languages have been compared to ASL as well, with intriguing results. Sociolinguistic Variation in American Sign Language stands alone as the new standard for students and scholars committed to this discipline.

Ceil Lucas is Professor Emerita of Linguistics at Gallaudet University.

Robert Bayley is a professor in the Department of Linguistics at the University of California, Davis.