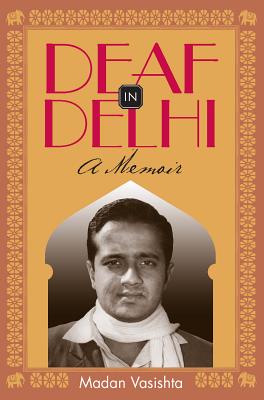 This is book number 4 in the Gallaudet New Deaf Lives series.

In 1952, after two weeks of typhoid fever and the mumps, 11-year-old Madan Vasishta awoke one night to discover that he could no longer hear. He was horrified because in India, the word for “deaf” in all three main languages, Punjabi, Urdu, and Hindi, denoted someone who was not really human. But he was young, brash, and irrepressible, and his autobiography Deaf in Delhi: A Memoir reveals how his boundless optimism enabled him to persist and prevail.

Vasishta’s story reflects the India of his youth, an emerging nation where most people struggled with numbing poverty and depended upon close family ties, tradition, and faith to see them through. His family’s search for a cure took him to a host of medical specialists and just as many sadhus and mahatmas, holy men and priests. The school in his small village was ill-prepared to educate deaf students then, so he herded the family cattle, usually the work of hired servants. Vasishta refused to accept this as his final lot in life and fantasized constantly about better jobs. Eventually, he moved to Delhi where his dream of becoming a photographer came true. He also discovered the Delhi Deaf community that, with his family, helped him to achieve an even higher goal, traveling to America to earn a degree at Gallaudet College.

Vasishta, a natural raconteur, imbues Deaf in Delhi with the ever-present ebullience that served him so well in his journey. Readers will savor his good humor and honest observations and look forward to his next book with great relish.

Madan Vasishta is a former associate professor in the Department of Administration and Supervision at Gallaudet University.