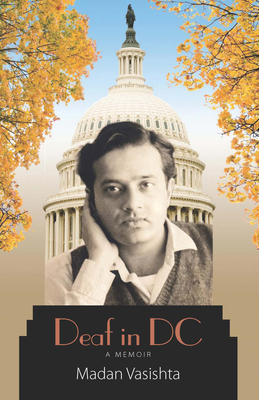 This is book number 9 in the Gallaudet New Deaf Lives series.

In his first memoir, Madan Vasishta described being a deaf boy in his homeland India, where “deaf” meant someone who is not human. After rising from herding cattle to being a respected photographer in Delhi, his first memoir concluded with his acceptance at Gallaudet College far away in America. Vasishta’s new memoir begins with his arrival in Washington, DC in 1967 with $40.00 in his pocket and very little knowledge of the new worlds he was entering.

Vasishta faced myriad challenges from the outset— he knew no American Sign Language and could not speech read, yet he found himself thrust into classes at Gallaudet two weeks into the semester. Cultural differences mystified him, such as how all American car accidents were someone else’s fault even when one’s car hits a stationary object. He was amazed that his fellow students did not deride him for his mistakes, unlike in India where he would have been scorned for his weakness. After five years, he returned home to India for a visit and was stunned to learn that he no longer fit in, that “even if you do not have an American Dream, the American Dream will have you.”

Deaf in DC follows Vasishta through half a century living in America. He witnessed the transformation from facing bias as a deaf, foreign man of color who could not get a job despite having a Ph.D., to receiving five offers as a school superintendent in the wake of the Civil Rights movement and Deaf President Now. His new memoir reflects a genuine worldview informed by the sage perceptions of a person who has lived widely in many worlds.