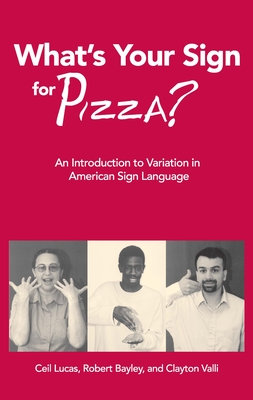 
This title is likely unavailable. Email or call for price and availability.
This introductory text celebrates another dimension of diversity in the United States Deaf community — variation in the way American Sign Language (ASL) is used by Deaf people all across the nation. The different ways people have of saying or signing the same thing defines variation in language. In spoken English, some people say “soda,” others say “pop,” “Coke,” or “soft drink;” in ASL, there are many signs for “birthday,” “Halloween,” “early,” and of course, “pizza.”

What’s Your Sign for Pizza? derives from an extensive seven-year research project in which more than 200 Deaf ASL users representing different ages, genders, and ethnic groups from seven different regions were filmed sharing their signs for everyday vocabulary. The film clips form a supplemental resource to the text and are referenced in their relevant chapters. The text begins with an explanation of the basic concepts of language and the structure of sign language. Each part of the text concludes with questions for discussion, and the final section offers three supplemental readings that provide further information on variation in both spoken and signed languages. What’s Your Sign for Pizza also briefly sketches the development of ASL, which explains the relationships between language varieties throughout the country.

The videos are available online at www.youtube.com/GallaudetUniversityPress.

Ceil Lucas is Professor Emerita of Linguistics at Gallaudet University.

Robert Bayley is a professor in the Department of Linguistics at the University of California, Davis.

Clayton Valli was an assistant professor in the Masters Interpreting Program at Gallaudet University.

“Considering all that the book has to offer, What’s Your Sign for Pizza? would be meaningful for those in the field of interpreting and interpreter education, ASL instructors, and other individuals who have a desire to deepen their understanding of variation and its influence on the evolution of ASL. Readers will gain insight into what constitutes variation, the different types, and potential reasons for why and how variation has developed over the years. Above all, this book gives strong justification for the importance of further research into the area of sociolinguistic variation in ASL.”
— Journal of Deaf Studies and Deaf Education