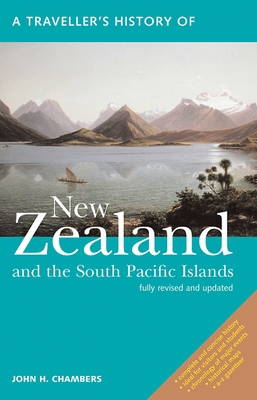 
This title is likely unavailable. Email or call for price and availability.
A Traveller's History of New Zealand and the South Pacific Islands gives the curious tourist not only a modern-day portrait of New Zealand and the far-flung islands, their political systems, and economic diversity, but also looks at the early settling of this massive area which covers about a fifth of the surface of the earth. When European navigators first sailed into this region, they were astonished at the exotic shared culture and language of the natives, separated in some cases by terrifying stretches of open ocean. The story of the peopling of the South Pacific Islands and New Zealand is one of the world's great sagas. The book covers the whole scope of New Zealand's past and present history and allows the reader to make sense of what they see in a way that no other guidebook can.
John H. Chambers was born in Queensland. He holds a Ph.D. from Columbia University and most recently was a visiting professor at City University of New York. Dr. Chambers has passed more than half his life in Australia and has travelled extensively in the Pacific. As a teacher in Australia, he taught New Zealand history as a special topic and has also worked in New Zealand. He has five degrees from universities and colleges on three continents. He is the author of A Traveller's History of Australia and Hawaii (On-the-Road Histories). Series Editor Professor Denis Judd is a graduate of Oxford, a Fellow of the Royal Historical Society and Professor of History at the London Metropolitan University. He has published over 20 books including the biographies of Joseph Chamberlain, Prince Philip, George VI, historical and military subjects, stories for children and two novels. He has reviewed and written extensively in the international press and in journals and is an advisor to the BBC History Magazine.
"Ideal before-you-go reading."