A Hundred Years of Japanese Film: A Concise History, with a Selective Guide to DVDs and Videos (Paperback) 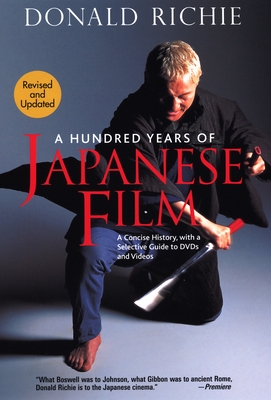 The authoritative guide to Japanese film, completely revised and updated.


Now available in paperback for the first time, A Hundred Years of Japanese Film by Donald Richie, the foremost Western expert on Japanese film, gives us an incisive, detailed, and fully illustrated history of the country's cinema.


Called "the dean of Japan's arts critics" by Time magazine, Richie takes us from the inception of Japanese cinema at the end of the nineteenth century, through the achievements of Kurosawa, Mizoguchi, and Ozu, then on to the notable works of contemporary filmmakers. This revised edition includes analyses of the latest trends in Japanese cinema, such as the revival of the horror genre, and introduces today's up-and-coming directors and their works.


As Paul Schrader writes in his perceptive foreword, Richie's accounting of the Japanese film "retains his sensitivity to the actual circumstances of film production (something filmmakers know very well but historians often overlook) . . . and shows the interweave of filmmaking—the contributions of directors, writers, cinematographers, actors, musicians, art directors, as well as financiers."


Of primary interest to those who would like to watch the works introduced in these pages, Richie has provided capsule reviews of the major subtitled Japanese films commercially available in DVD and VHS formats. This guide has been updated to include not only the best new movie releases, but also classic films available in these formats for the first time.

Former Curator of Film at the New York Museum of Modern Art, DONALD RICHIE has written some forty books on Japan and its people, including definitive works on the Japanese film directors Kurosawa and Ozu. The film version of his travel classic, The Inland Sea, has been shown on PBS and won several prizes at international film festivals, as well as the National Geographic Earth Award. Public People, Private People, his portraits of famous and far-from-famous Japanese, received praise from many quarters. Of Richie's two collections of essays, A Lateral View and Partial Views, Susan Sontag said: "Donald Richie writes about Japan with an unrivaled range, acuity, and wit."
His latest book is The Japan Journals: 1947-2004.


A well-known director (American Gigolo, Affliction) and screenwriter (Taxi Driver, The Last Temptation of Christ), PAUL SCHRADER also has a strong feeling for Japan and its films. Not only did he write and direct Mishima, considered by many to be his masterpiece, he also contributed to the very first appreciation of the Japanese yakuza film genre and wrote the seminal Transcendental Style in Film: Ozu, Bresson, Dreyer.

"What Boswell was to Johnson, what Gibbon was to ancient Rome, Donald Richie is to the Japanese cinema." —Premiere Magazine

"The guide to DVDs and videos includes the names of the principals and capsule-summaries of the films and it alone worth the price of the book. A Hundred Years of Japanese Film is both illuminating and thought-provoking." —The Bloomsbury Review

"...Through classic works by Akira Kurosawa, Shimizu Ozu and Kenji Mizoguchi, and into modern day films by Takeshi Kitano, Hirokazu Kore'eda and Hayao Miyazaki. A selective guide for film aficionados of all ages." —Rafu Shimpo

"Richie's sense of both future and past remains as sharp as ever." —Film Comment

"Donald Richie, whom we may call the 'Emperor' of Japanese film history, has done it again! This is probably the best, extensive 'digest' on all aspects of Japanese cinema to be available today in English." —Cinemaya

"Superb." —In These Times

"A concise, beautifully realized guide to the expansive history of Japanese film." —A Magazine: Inside Asian America

"Richie's expertise is hard to miss; surely he overlooks no aspect of these films." —Library Journal

"The impressive amount of information ... and Richie's enthusiasm and critical acumen make this essential for film studies and collections." —Booklist

"Richie's awareness of various film theories and criticism and his sensitivity to historical specificity and to new trends in Japanese film make this book an extremely inspiring one." —Persimmon

"A new book by Richie is always a welcome event ... He writes with an insider's view of Japanese culture. ...Both funny and refreshingly critical. He is the perfect guide to little-known styles, directors, and studios of his adopted land... For all collections." —Choice

"Monumental. Tracing the roots of Japanese film while exploring artistic and industrial intricacies of the business, A Hundred Years of Japanese Film is encyclopedic and laced with wonderful insights." —Tucson Weekly

"Richie's journey through a century of Japanese cinema is designed to fascinate. Like a master tour guide, he uses his encyclopedic knowledge of Japanese art, theater and history to show us how and why this national cinema is so fundamentally different from others." —Pacific Reader

"A Hundred Years of Japanese Film is a well-informed, insightful, and accessible (not loaded down with jargon) product of a lifetime devoted to the study and appreciation of his subject." —Hawai'i Herald

"For a scholarly, thoughtful, in-depth analysis on just about every classic Japanese movie, as well as a meaningful overview about the genre as a whole, A Hundred Years of Japanese Film is clearly and justifiably the principle reference to consult!" —Midwest Book Review

"A gorgeous book, written out of love by an obsessive film fan, and its only potential drawback is that it's likely to convert readers into equally obsessive fans." —Bookreporter.com

"A fitting coda to a lifetime of work from a writer who, to no small degree, helped to save the Japanese cinema from what might have easily been one hundred years of obscurity." —Japan Times