Larry Gets Lost in Portland (Hardcover) 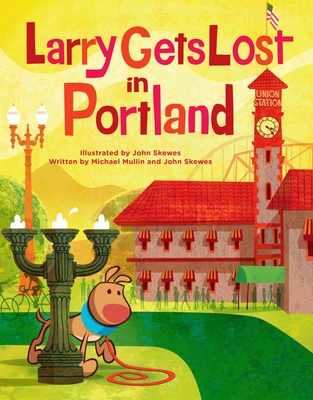 Larry Gets Lost in Portland (Hardcover)


Available in Warehouse. Wait for Email Confirmation for ETA
In Larry the adorable pooch's latest adventure, he goes on vacation with Pete and the family to Portland, Oregon. As usual, in hot pursuit of a tempting treat, he gets separated from the family and frantically tries to find them again. Along the way he discovers some of the city's most fun and interesting landmarks and cultural attractions, including the waterfront, the zoo, the Portland Art Museum, Hawthorne Bridge, Old Town, and the Park Blocks.

List of attractions Larry visits:
Old Town
OMSI
The waterfront
Hawthorne Bridge
The Park Blocks
Powell's Books
The zoo
International Rose Test Garden
Portland Art Museum
Jen Weld
Hawthorne Bridge
Light Rail and streetcar
Union Station
John Skewes is a professional illustrator living in Seattle. He began work as a product designer and character artist for Disney Consumer Products before leaving to start his own company, Retrodyne Industries in 2001. His clients include Warner Bros., Hanna-Barbera, Fox, Pixar, and Simon & Schuster. As the creator and illustrator of the award-winning Larry Gets Lost™ children's book series, John has followed Larry from the southern tip of Texas to tiny Nome, Alaska, and been lost several times himself. He has illustrated over 20 children's books, including the Flintstones, Tom and Jerry, and Alvin and the Chipmunks.

Michael Mullin lives in LA, but grew up in New England, where all his sports allegiances remain. He is the author of the TaleSpins™ books for young adults: 8: The Previously Untold Story of the Previously Unknown 8th Dwarf, The Plight and Plot of Princess Penny, and the upcoming Jack'd.
A PNBA Bestseller!

"The irrepressible Pete and his dog Larry travel to Portland resulting in the inevitable separation, plentiful adventures and joyous reunion. Like Skewes’ other books in the Larry Gets Lost series, readers are treated to visits to the major landmarks and experiences found in Portland. For readers acquainted with the city or planning a visit, the specificity and familiarity is especially engaging and will warrant several reads to notice all the additional details shown in the digitally drawn illustrations... The colorful illustrations with plentiful shadows and white dotted lines tracking Larry’s movements circling trees and joyfully prancing forward are suitable for whole group reading as well as individual readers."
—Puget Sound Council for the Review of Children's Media

“This is a first-rate lost and found journey. The book also offers stunningly bright retro-cartoon style illustrations, often from the perspective of Larry the dog that will appeal to all preschoolers.”
—Park Ridge Library

“The story's colorful, retro-inspired illustrations bring the beloved city highlights to life, and make them seem magical again even to a jaded city kid who walks past them every day.”
—Red Tricycle

“Taking a romp through the city doesn't have to be exhausting - just add it to your bedtime story ritual!”
—Red Tricycle

"Larry Gets Lost in Portland is not only a fun story for kids to follow along with, I learned several fun facts about Portland as well! Who knew the Hawthorne Bridge, built in 1910, is the oldest working vertical bridge. Or that the Portlandia sculpture, is the second largest hollow copper sculpture in the US after the Statue of Liberty. Hudson loved trying to find Larry throughout Portland, whether he was stopping for a treat at Voo Doo Doughnut's or hiding in the submarine at OMSI. Larry Gets Lost In Portland is a cute book that entertains the whole family."
—Local Haven

"These wonderful, easy-reading books for children of all ages highlights many of the wonderful things to do and see while traveling to these cities. Both armchair and actual travelers will relish getting lost with Larry.”
—Cheryl Weems, Deschutes Public Library system, Bend Bulletin

“Informative tidbits coupled with the rhyming words of Michael Mullin make it a more enjoyable and educational read. Being lost and searching has never been this much fun, and in the end Larry and his owner Pete reunite to drive back home exhausted from all the excitement. They also take with them the promise of yet another cool adventure the next day.”
—Kaye Cloutman, Sacramento Book Review