For the Sake of the Song: Essays on Townes Van Zandt (Hardcover) 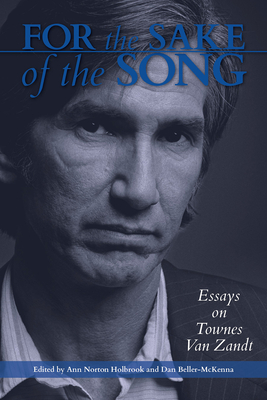 For the Sake of the Song: Essays on Townes Van Zandt (Hardcover)

After death, Townes Van Zandt found the success that he sabotaged during life. Diagnosed as bipolar, an alcoholic, and perennially unreliable, Van Zandt died of heart failure at the age of fifty-two on New Year’s Day in 1997. He released sixteen albums during life. Since his death, several more albums have been released, both by and in honor of him. Many articles and books have been published about him, including Robert Hardy’s A Deeper Blue by UNT Press.

Van Zandt, the self-destructive wandering troubadour, was long underappreciated but is now a favorite among critics and fans. His best-known songs are “Pancho and Lefty,” covered by Waylon Jennings and Willie Nelson, and “If I Needed You.” Steve Earle’s 2009 cover album, Townes, jump-started a slate of tributes, including those by Robert Earl Keen, Lucinda Williams, and John Prine.

For the Sake of the Song collects ten essays on Townes Van Zandt using a variety of approaches. Contributors examine, for example, his use of the minor key, the psychological dimension of his song “High, Low and In Between,” and his reception in the Austin music scene. His relationships receive consideration, as well, through the observations of Richard Dobson, another “outlaw” singer-songwriter, with whom he toured in the Hemmer Ridge Mountain Boys. An introduction by editors Ann Norton Holbrook and Dan Beller-McKenna provides an overview of Van Zandt’s literary excellence and philosophical wisdom, rare among even the best songwriters.
ANN NORTON HOLBROOK is an English professor at Saint Anselm College and the author of Paradoxical Feminism: The Novels of Rebecca West. DAN BELLER-McKENNA is a music history professor at the University of New Hampshire and the author of Brahms and the German Spirit.
“For the Sake of the Song is a tour de force that mirrors Townes’s life and art in spanning the ‘high, low, and in between.’ The array of voices, approaches, and disciplines contained in the work—journalists, musicologists and musicians, archivists, and litterateurs—makes for a nuanced and multifaceted understanding of Townes Van Zandt’s body of work.”—Jason Mellard, author of Progressive Country

“The multiplicity of interpretations that this collection brings together is indeed a tribute to the depth of TVZ’s vision and the ability for his catalog and personal life to sustain a wide-ranging, free-wheeling examination.”—Joe Specht, coeditor of The Roots of Texas Music

“It is no longer surprising to see scholars explore the work of Townes Van Zandt by applying feminist, psychoanalytic, or cultural materialist lenses to his lyrics and music. His songs ever increasingly inspire new generations of musicians, and his stature as the ‘songwriter’s songwriter’ continues to grow. It is a pleasure to find a collection of essays so consistently probing and widely varied. This collection is worthy of its subject, and I can think of no higher praise.”—Roxanne Harde, coeditor of Reading the Boss and Walking the Line

“Editors Holbrook and Beller-McKenna have assembled a collection that questions how we listen to Townes Van Zandt, taking approaches that offer consideration of his literary accomplishments as lyricist, his talents as a melodist, his process of creation as a person with mental illness, his studio engagement in comparison with his live performances, his macabre humor, and his lasting impact on American music. This needed volume helps us understand Van Zandt as a dedicated artist and provides sharper definition of his earned praise as a ‘songwriter’s songwriter.’”—Thomas Alan Holmes, coeditor of Walking the Line

“For the Sake of the Song: Essays on Townes Van Zandt is a significant contribution to the discourse on America’s enigmatic singer-songwriter. Covering topics as varied as Townes’s influences, musicianship and musical structures, perspectives on gender, recording career, and legacy, the collection offers fresh and invigorating insights into his work. While the scholarship is impeccable, it is clear that the authors have immersed themselves as fans and aficionados of Townes’s songs with a deep admiration for his art and humanity. Townes would be proud of, and honored by, this fine collection.”—Mickey White, long-time musical companion of Townes Van Zandt and author of Another Mickey: Ruminations of a Texas Guitar Slinger