Medal of Honor: One Man's Journey From Poverty and Prejudice (Memories of War) (Mass Market) 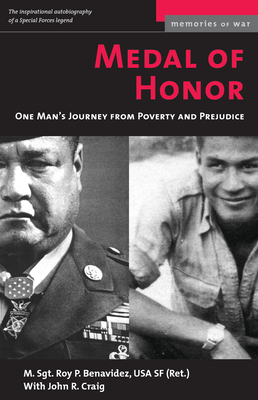 Medal of Honor: One Man's Journey From Poverty and Prejudice (Memories of War) (Mass Market)


Available in Warehouse. Wait for Email Confirmation for ETA
Half-Hispanic, half-Yaqui Indian, and an orphan, Roy Benavidez fought his way out of poverty and bigotry to serve with the U.S. Army’s elite—the Airborne and the Special Forces. Seriously wounded in Vietnam, he was told he would never walk again. Benavidez not only conquered his disability but demanded to return to combat.

On his second tour, when twelve of his comrades on a secret CIA mission in Cambodia were surrounded by hundreds of North Vietnamese regulars, Benavidez volunteered to rescue them. Despite severe injuries suffered in hand-to-hand combat, Benavidez personally saved eight men. His actions ensured his everlasting place as one of the great heroes of the war. In February 1981, President Reagan awarded him the Medal of Honor.
“A compelling story of a true American hero . . . Every American should read Medal of Honor because it is not only a war story but also a tale of human courage and incredible bravery.”—Vietnam magazine


“Roy Benavidez is a fighter. He fought against the bigotry of his South Texas hometown, against the Vietnamese communists, against paralysis and near-fatal wounds, against a bureaucracy that would deny him disability benefits, and finally against apathy and despair among America's youth. This is his remarkable story.”—Col. Harry G. Summers, Jr., editor of Vietnam magazine


“Heartfelt and stirring . . . This is the story of a true American hero.”—Hispanic magazine