Cinderella and the Glass Ceiling: And Other Feminist Fairy Tales (Hardcover) 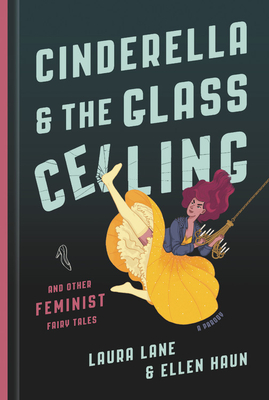 Cinderella and the Glass Ceiling: And Other Feminist Fairy Tales (Hardcover)


On Our Shelves as of 9am Today
This wickedly wise (and wisecracking) parody of classic fairy tales redefines happily ever after for the modern feminist era.

You know what? It's super creepy to kiss a woman who is unconscious. And you know what else? The way out of poverty isn't by marrying a rich dude -- or by wearing fragile footwear, for that matter. And while we're at it, why is the only woman who lives with seven men expected to do the cooking, cleaning, and laundry?
Fairytales need a reboot, and comedy queens Laura Lane and Ellen Haun are the women to do it. In Cinderella and the Glass Ceiling, they offer a rollicking parody of classic (read: patriarchal) tales that turns sweet, submissive princesses into women who are perfectly capable of being the heroes of their own stories. Mulan climbs the ranks in the army but wages a different war when she finds out she's getting paid less than her fellow male captains, Wendy learns never to trust a man-boy stalking her window, Sleeping Beauty's prince gets a lesson in consent, and more.

Busting with laugh-out-loud, razor-sharp twists to these outdated tales, Cinderella and the Glass Ceiling is fun, magical, necessary, and totally woke.

Laura Lane is a comedy writer, performer, journalist, and author. She's written for People, McSweeney's, the New Yorker's Daily Shouts, ESPN, Esquire, Vanity Fair, and Cosmopolitan. Her book This Is Why You're Single was optioned for TV and has been covered by the New York Times, the L.A. Times, The Washington Post, and Bustle. She co-hosts the This Is Why You're Single podcast. She lives in Brooklyn, New York.
Ellen Haun is a writer, actor and comedian. She plays the hapless law student Ms. Chapin on ABC's How to Get Away with Murder. Ellen wrote, produced and starred in the web series OMGHI and the short film No Limes. She has performed at the Sydney Opera House, St. Ann's Warehouse, and Williamstown Theatre Festival. She is a contributor to the humor website the Belladonna. She lives in Brooklyn, New York.
"Why did we let dudes write stories about women for so long? They put us in towers, made us clean houses, and made us very sleepy! Ellen and Laura are finally making it right!"—Lauren Adams, Unbreakable Kimmy Schmidt

"For any little girl obsessed with princesses and/or fairy tales who grew up to realize how creepy and backwards they actually were--this book is for YOU. Can't. Stop. Laughing."—Sarah Merrill, host of the Big Kid Problems podcast

"A witty and much-needed fairy tale reboot. Makes you think about what we've been teaching our children!"—Jo Firestone, comedian

"The Brothers Grimm have nothing on Laura Lane and Ellen Haun. From a woke Sleeping Beauty to a Red Riding Hood fighting wolf-calls, here's a book of fairy tales not for your children but for your hilarious girlfriends. It's perfect reading for every feminist who longs for a happy ending."—Jennifer Wright, author of It Ended Badly

"Laura Lane and Ellen Haun nail it with this witty and remarkable book that smartly reminds women to be the heroes of their own stories rather than wait around for saving."
—Jenny Mollen, New York Times bestselling author of I Like You Just The Way I Am

"A mix of modern-day commentary and clever subversions of the originals, Cinderella and the Glass Ceiling reclaims the storytelling from the guys and gives the heroes (not just the Little Mermaid!) back their voices."—Caitlin Kunkel, co-author of New Erotica for Feminists

"A dynamite read. The subject matter is serious, but the delivery is an express train to Laugh City."—Joel McHale, actor, comedian, and author of Thanks for the Money