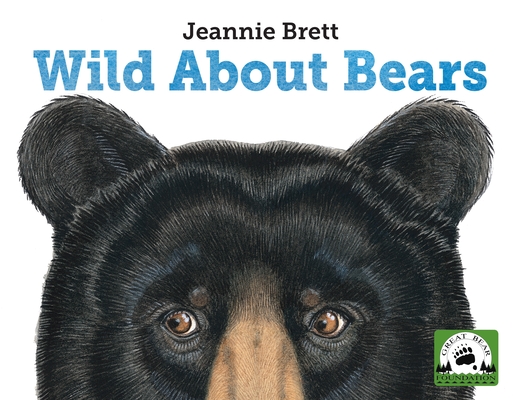 This comprehensive catalogue leaves no bear behind! Discover the world’s eight bear species in gorgeously illustrated detail. Wild About Bears begins with the common physical traits and behaviors shared by all bears before diving in to the detailed differences. Discover the habits and habitats of the polar bear, brown bear, American black bear, spectacled bear, Asiatic black bear, sloth bear, sun bear, and giant panda and marvel at the adaptations each has developed to survive in a challenging world.

Back matter includes a brief word on the threats humans and a changing climate pose to bear populations, a map of global bear distribution, an overview of bear habitats, and a list of further reading for curious future zoologists.

Both text and artwork support this book's title: full of facts, but only those emphasizing endearing bear habits; full of gentle watercolors that show peaceful bear-family scenes. The book is laid out logically. After an initial double-page spread introduces the fact that our planet hosts eight bear species, subsequent spreads address each of the following: physical traits; general behaviors; each of the eight species; environmental concerns. Children who delight in learning animal facts will revel in such sentences as, "Asiatic black bear nests look a lot like large bird nests and may be found 60 feet up in a tree." There's plenty of new, gracefully defined vocabulary too, as in plantigrades and vacuoles. Brett highlights details in physiology and habitats to differentiate the species from one another and gives scientific and common names for each. Despite the scientific, almost dry text, the bears' faces and body language border on anthropomorphism, with several bears gazing winsomely at readers. This helps to reinforce the author's assertion that humans need to protect bears and their habitats for everyone's mutual benefit. However, the older the reader, the less likely their acceptance of perpetually well-behaved bears. There's not even one fierce, upright grizzly!
With its clear text and illustrations, this introduction is just the ticket for younger elementary readers.
-Kirkus Reviews

Readers may be surprised to learn that only eight species of bears exist on the planet (polar, brown, spectacled, sloth, sun, giant panda, and North American and Asiatic black bears). This fact-filled guide provides an overview of each species, focusing on their physical and behavioral characteristics in relationship to their environments. After initial introductory paragraphs, Brett scatters brief, captionlike sentences throughout her warm, naturalistic watercolor scenes. “The long, curved claws and bowed legs of the sun bear make it an excellent tree climber,” she writes as two are shown high in the branches of a tall tree, one licking at a beehive. A solid introduction to bears, their habits, and the challenges they face.
-Publishers Weekly

There are only eight species of bears on Earth, and Brett examines each of them. Opening spreads discuss general physical traits and behavior; a double-page chapter is then devoted to each species. Many facts are scattered throughout the captions for the art as well as in the main text, but font sizes help guide readers’ eyes to keep the text from becoming overwhelming. The watercolor illustrations depict the bears’ habitats as well as behaviors, and a world map indicates their range. A useful addition.
-School Library Journal

In her latest informative picture book, Brett shows not only how varied the world's eight species of bears are but also how much they have in common. In a series of engaging double-page watercolors, Brett depicts bears in various habitats doing their typical activities--hunting, exploring, eating, and sleeping. Fun facts--for example, "The sucking noise of the sloth bear's snout can be heard from 300 feet away"--are liberally scattered throughout the spreads in a smaller font size. Fully aware of the cuteness factor of cubs, Brett features a mother bear and at least one cub in almost all of her paintings. (And as the section on North American black bears reveals, one mother may give birth to different colored cubs, including some that look like polar bears.) Brett ends her text with the reminder that humans should think about protecting bears and the ecosystems in which they live. Also included in the back matter are a habitat glossary and a map, which shows where in the world the eight species live.
-Booklist


Can bears really run as fast as a horse? How do bears mark their territory? Do all bears hibernate during the winter? How many different bear species are there? You can answer these questions and find out much more by reading Wild About Bears.

Yes, for short distances, some bears can run up to 35 mph which is what some horses can run. Does that surprise you? Many bears have a keen sense of smell and direction so that their memory can help them travel up to 100 miles away and still return to their homes. Many bear behaviors and physical traits are explored within the first four pages, and then looked at in–depth with each of the eight different bear species.

Bear habitats are explored beginning at the Arctic Circle with polar bears. Did you know that they have vacuoles (suction cups) on the soles of their feet to give them traction on snow and ice? Polar bears appear white but their skin is actually black to absorb the sun’s heat. Brown bears are at home in forests, grasslands, and meadows. Why are some of them called “grizzly” bears?

Are all North American black bears black in color? They are found in forests, swamps, and meadows and their coats come in a range of colors. Ever hear of a spectacled bear? You will find them in cloud forests as well as in deserts, steppes, plateaus, and dry or rain forests. The Asiatic black bears live in nests? Indeed they can have their nests as high as 60 feet up a tree located in the foothills and forested areas up to 13,000 feet in elevation. Sloth bears often hang from tree limbs like the sloths that they are named after. Sloth bears can be found in a variety of forests and grassy or rocky areas.

Have you ever read about sun bears? They are the smallest and least well known bears that like to be sleeping and sun bathing up in trees in hot, humid rainforests. Giant panda bears are the rarest of bears who subsist on large quantities of bamboo as a daily feast. Most of them live in the fourteen nature reserves in cold, damp forests at high elevations. Why are they the worldwide symbol of conservation?

Bears around the world give us more food for thought. The color–coded world map shows us where bears live. The two page habitat glossary ties geography into science quite nicely. The bibliography with books and current websites provides you with extensions that you may wish to pursue. As author and illustrator, Jeannie Brett takes us into the world of bears that is beyond compare. The publisher has targeted an audience of grades 1–4, but some students may need help with the higher level vocabulary at times.
-NSTA Recommends