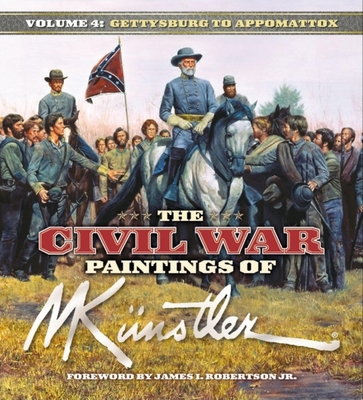 By Mort Kunstler, James I. Robertson (Foreword by)

This is book number 4 in the Civil War Paintings series.

For nearly thirty years, Mort Kunstler has focused his considerable artistic talent on interpreting the Civil War through his paintings. In doing so, he has turned to leading historians and scholars for information that he has then translated on canvas to create an indelible image of this defining ordeal in America's history. More than 160 of those images--supplemented by preliminary sketches, early studies, and photographs of works in progress--are the basis for the four volumes in this series. Volume 4 follows the course of the war from the battle of Gettysburg (July 1-3, 1863) through the end of the war at Appomattox (April 9, 1865). The march through Virginia and Tennessee and Georgia, culminating at the battle of Chickamauga, the Atlanta campaign, the battles of Franklin and Nashville, Sherman's March to the Sea, the North's rampage through South Carolina, and battles through North Carolina all ended in a parlor in a house at an obscure railroad crossroads.