The Other Shoe: A Novel (Paperback) 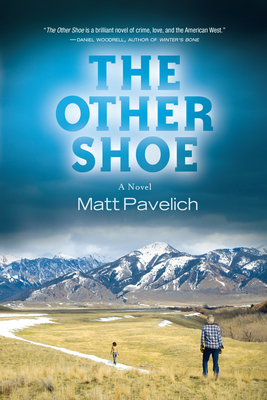 The Other Shoe: A Novel (Paperback)


This title is likely unavailable. Email or call for price and availability.
Henry Brusett is the only one who can explain the mysterious death of Calvin Teague. He's the only one who truly knows how the young man came to be bloodied and lifeless on his land in Montana's vast backcountry. But Henry won't say anything. His silence and its ripple across his small community form the heart of Matt Pavelich's engrossing second novel, The Other Shoe.

Henry never wanted much more than a family and his days spent as a sawyer deep in the wilderness. But by middle–age Henry is divorced, disabled, and isolated on a remote plot of land in Montana. After years of self–imposed loneliness, Henry meets Karen, who's half his age and knows nothing but her own willful solitude. Their union is the unlikeliest of bonds, a mix of comfort and guilt for Henry who believes he's too old for Karen. But it's also the spark of his undoing, a decision that leads him toward one of his greatest regrets.

As members of Henry and Karen's small town try to both uncover and cover–up the truth surrounding Calvin Teague's untimely death, The Other Shoe moves toward the inescapable and shines in the rarity of Pavelich's assured and haunting style.
Matt Pavelich is the author of the novel Our Savage and the short story collection Beasts of the Forest, Beasts of the Field, which won the Montana First Book Award. Awarded Michener and Montana Arts Council fellowships, he lives in Montana.
Praise for The Other Shoe

"Matt Pavelich is a native Montanan, he knows that world inside and out, and The Other Shoe is rich with details that convince, insights that amaze. His prose is among the most impressive now being written, elegant, nuanced, rough when needed, the high and low of language. The Other Shoe, is a brilliant novel of crime, love, and the American West, and it deserves a wide readership." —Daniel Woodrell, author of Winter's Bone

"[A] literary study of the lives of outliers, a story of love, of sacrifice, of a man with a sense of responsibility as clear as the mountain air... an accomplished and affecting story of love and loyalty, accountability and honor." —Kirkus

"With the publication of this wonderfully engaging novel—at once heartbreaking and comic—set in the darkest, dankest woods of northwestern Montana, Matt Pavelich affirms that his magisterial first novel, Our Savage, was no fluke. Once again, in perfectly chiseled (and irresistible) prose, he offers us a new vision of the American West, in which innocence is no bar to evil and good people search for expiation wherever it might be found. Matt Pavelich is that rare thing in American letters: a truly original voice." —Rick Newby, editor, The New Montana Story: An Anthology


"Sometimes you know immediately where you are—a phrase by Charlie Parker, a Jackson Pollock seen across a room. That's the way it is after a sentence or two of Matt Pavelich's. The writing is nimble, mordant, witty, each of its many characters rendered with a generosity and insight that make them hard to forget. The Other Shoe is a remarkable achievement, the book those who've been following Matt Pavelich's career have been waiting for. For the rest, here's your chance to find out why." —Ehud Havazelet, author of Bearing the Body