What Every Environmentalist Needs to Know about Capitalism (Paperback) 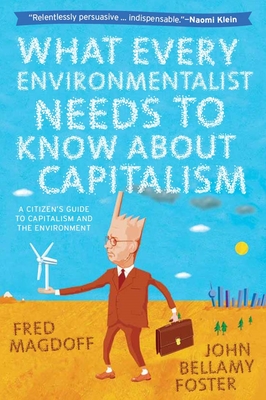 What Every Environmentalist Needs to Know about Capitalism (Paperback)

Praise for Foster and Magdoff's The Great Financial Crisis In this timely and thorough analysis of the current financial crisis, Foster and Magdoff explore its roots and the radical changes that might be undertaken in response. . . . This book makes a valuable contribution to the ongoing examination of our current debt crisis, one that deserves our full attention.--Publishers Weekly

There is a growing consensus that the planet is heading toward environmental catastrophe: climate change, ocean acidification, ozone depletion, global freshwater use, loss of biodiversity, and chemical pollution all threaten our future unless we act. What is less clear is how humanity should respond. The contemporary environmental movement is the site of many competing plans and prescriptions, and composed of a diverse set of actors, from militant activists to corporate chief executives.

This short, readable book is a sharply argued manifesto for those environmentalists who reject schemes of "green capitalism" or piecemeal reform. Environmental and economic scholars Magdoff and Foster contend that the struggle to reverse ecological degradation requires a firm grasp of economic reality. Going further, they argue that efforts to reform capitalism along environmental lines or rely solely on new technology to avert catastrophe misses the point. The main cause of the looming environmental disaster is the driving logic of the system itself, and those in power--no matter how "green"--are incapable of making the changes that are necessary.

What Every Environmentalist Needs To Know about Capitalism tackles the two largest issues of our time, the ecological crisis and the faltering capitalist economy, in a way that is thorough, accessible, and sure to provoke debate in the environmental movement.

Fred Magdoff taught at the University of Vermont in Burlington, is a director of the Monthly Review Foundation, and has written on political economy for many years. He is most recently the author (with John Bellamy Foster) of The Great Financial Crisis: Causes and Consequences (Monthly Review Press).