A Child's Life and Other Stories (Paperback) 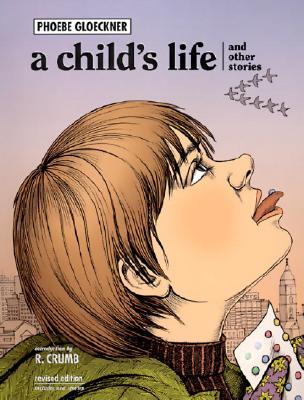 A Child's Life and Other Stories (Paperback)


This title is likely unavailable. Email or call for price and availability.
Phoebe Gloeckner's first book collects her highly praised autobiographical accounts of a teenage girl's loss of innocence through sex, drugs, rape, and AIDS. This edition includes eight pages of new material.

Long respected as one of the finest and most original of today's underground comics artists, Gloeckner shows both technical artistry and tremendous range—from her sly, lurid, and brilliantly colored posters for rock groups to her textbook-quality medical illustrations; from her sharp naturalistic juxtapositions for The Atrocity Exhibition (J.G. Ballard) to the signature comics for which she is best known.

Pages include both black and white and color comics, some that were published before in obscure comic books, and some of her classics in addition to new stories. In detailed, nuanced panels, these strips depict the isolation, horror, and disappointment—but also the revolutionary, transformative power—of young women trapped in circumstances ringed with drugs and sexual abuse. Gloeckner continues as a major literary and visual artist.
Phoebe Gloeckner was born in Philadelphia and raised in San Francisco. Her comics first appeared in underground publications when she was in her teens. Gloeckner is also author/illustrator of the critically acclaimed Diary of a Teenage Girl, published by North Atlantic Books in 2003. In addition to paintings and comics, she has made award-winning short films.
"I thought that Phoebe Gloeckner's story, 'Minnie's Third Love,' was one of the best comic stories I ever read in my life ... a masterpiece. She is one of the best, which is interesting, seeing as: A.) She's a cute girl, B.) She's not a very prolific artist ... two factors which, one would assume, would be a hindrance to great art. But it's always a mystery, what makes great art ... there, I said it ... she's a great artist."
—R. Crumb, cartoonist

"Many cartoonists today mine their personal lives for subject matter. Phoebe Gloeckner achieves what few of them can; she makes the autobiographical universal. Her finely crafted drawings and emotionally powerful story-telling ability combine in this terrific collection to tell us painful, sympathetic, and hilariously human truths. Read this book. Find out why comics are art."
—Bill Griffith, creator of Zippy the Pinhead