Strong to the Hoop (Paperback) 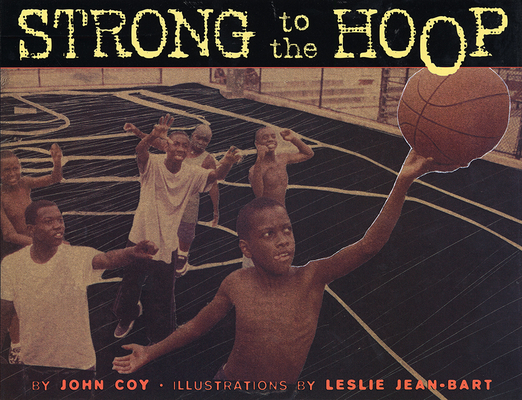 Strong to the Hoop (Paperback)

A boy finally gets to play basketball on the main court with the older boys, and has to prove he can hold his own.

James has always settled for watching his big brother Nate play basketball from the sidelines. Then one day, a player is injured and James is asked to join the older boys' game. This is James' chance to prove himself on the main court, and he knows there is much more than game point riding on his last shot.

John Coy's energetic prose captures the intensity and emotion of the competition, while Leslie Jean-Bart's photo collages deliver the urban pace of the game.

John Coy is the author of several award-winning books for children, including Strong to the Hoop, an ALA Notable Book and Night Driving, named one of the Best Books of 1996 by The New York Times. Around the World was inspired by Coy's lifelong passion for basketball. Mr. Coy teaches writing to children and has developed an innovative class that combines basketball and poetry. He and his family live in St. Paul, Minnesota. Leslie Jean-Bart photographs and photo collages have appeared in NEW YORK MAGAZINE, NEWSWEEK, and THE NEW YORK TIMES. A native of Haiti, he received a masters degree in journalism from Columbia University. Mr. Jean-Bart now lives in New York City. Strong to the Hoop is his first book for children. To find out more about Leslie Jean-Bart, visit his Web site: www.lesliejean-bart.com.