The Reveries of the Solitary Walker, Botanical Writings, and Letter to Franquières (Hardcover) 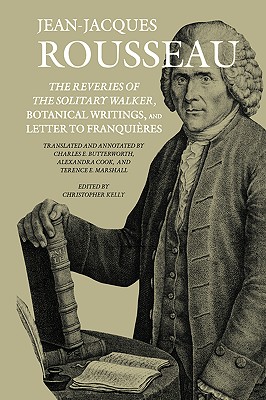 The Reveries of the Solitary Walker, Botanical Writings, and Letter to Franquières (Hardcover)

This is book number 8 in the Collected Writings of Rousseau series.

“I am now alone on earth, no longer having any brother, neighbor, friend, or society other than myself” proclaimed Rousseau in Reveries of the Solitary Walker. Reveries, along with Botanical Writings and Letter to Franquières, were all written at the end of his life, a period when Rousseau renounced his occupation as author and ceased publishing his works. Presenting himself as an unwilling societal outcast, he nonetheless crafted each with a sharp eye on his readership. Whether addressing himself, a mother hoping to interest her child in botany, or a confused young nobleman, his dialogue reflects the needs of his interlocutor and of future readers. Although very different in style, these three works concern overlapping subjects. Their unity comes from the relation of the other writings to the Reveries, which consists of ten meditative “walks” during which Rousseau considers his life and thought. The third and fourth walks discuss truth, morality, and religious belief, which are the themes of the Letter to Franquières; while the seventh is a lengthy discussion of botany as a model for contemplative activity. The overarching themes of the volume—the relations among philosophic or scientific contemplation, religion, and morality—provide Rousseau’s most intimate and final reflections on the difficulties involved in understanding nature.
Jean-Jacques Rousseau (1712–78) was a leading Genevan philosopher and political theorist and one of the key figures of the Enlightenment.