Emile: or On Education (Includes Emile and Sophie, or the Solitaries) (Hardcover) 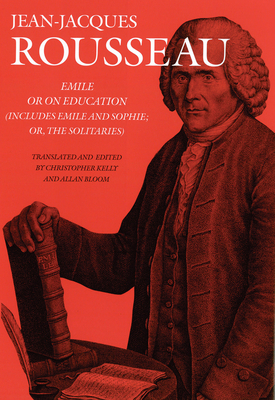 Emile: or On Education (Includes Emile and Sophie, or the Solitaries) (Hardcover)

This is book number 13 in the Collected Writings of Rousseau series.

The acclaimed series The Collected Writings of Jean-Jacques Rousseau concludes with a volume centering on Emile (1762), which Rousseau called his “greatest and best book.” Here Rousseau enters into critical engagement with thinkers such as Locke and Plato, giving his most comprehensive account of the relation between happiness and citizenship, teachers and students, and men and women. In this volume Christopher Kelly presents Allan Bloom’s translation, newly edited and cross-referenced to match the series. The volume also contains the first-ever translation of the first draft of Emile, the “Favre Manuscript,” and a new translation of Emile and Sophie, or the Solitaries. The Collected Writings of Rousseau Roger D. Masters and Christopher Kelly, series editors 1. Rousseau, Judge of Jean-Jacques: Dialogues 2. Discourse on the Sciences and Arts (First Discourse) and Polemics 3. Discourse on the Origins of Inequality (Second Discourse) Polemics, and Political Economy 4. Social Contract, Discourse on the Virtue Most Necessary for a Hero, Political Fragments, and Geneva Manuscript 5. The Confessions and Correspondence, Including the Letters to Malesherbes 6. Julie, or the New Heloise: Letters of Two Lovers Who Live in a Small Town at the Foot of the Alps 7. Essay on the Origin of Languages and Writings Related to Music 8. The Reveries of the Solitary Walker, Botanical Writings, and Letter to Franquières 9. Letter to Beaumont, Letters Written from the Mountain 10. Letter to D’Alembert and Writings for the Theater 11. The Plan for Perpetual Peace, On the Government of Poland, and Other Writings on History and Politics 12. Autobiographical, Scientific, Religious, Moral, and Literary Writings 13. Emile or On Education (Includes Emile and Sophie; or The Solitaries)
Jean-Jacques Rousseau (1712–78) was a leading Genevan philosopher and political theorist and one of the key figures of the Enlightenment.

At his death in 1992, Allan Bloom was the John U. Nef Distinguished Service Professor in the Committee on Social Thought and in the College at the University of Chicago. He is the author of several books, including Shakespeare’s Politics (with Harry V. Jaffa) and The Closing of the American Mind.