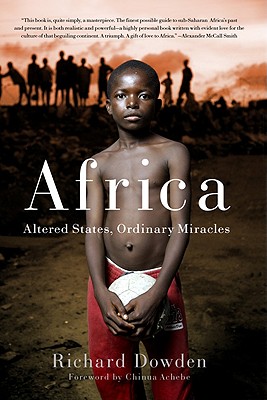 
Available in Warehouse. Wait for Email Confirmation for ETA
After a lifetime's close observation of the continent, one of the world's finest Africa correspondents has penned a landmark book on life and death in modern Africa. It takes a guide as observant, experienced, and patient as Richard Dowden to reveal its truths. Dowden combines a novelist's gift for atmosphere with the scholar's grasp of historical change as he spins tales of cults and commerce in Senegal and traditional spirituality in Sierra Leone; analyzes the impact of oil and the internet on Nigeria and aid on Sudan; and examines what has gone so badly wrong in Zimbabwe, Rwanda, Burundi, and the Congo. Dowden's master work is an attempt to explain why Africa is the way it is, and enables its readers to see and understand this miraculous continent as a place of inspiration and tremendous humanity.
Richard Dowden is director of the Royal African Society. He spent a decade as Africa Editor of the Independent, and then another decade as Africa Editor of the Economist. He has made three television documentaries on Africa, for the BBC and Channel 4.
Times UK
“This book is anecdotal, engaging, realistic, and delightfully up-to-date.”