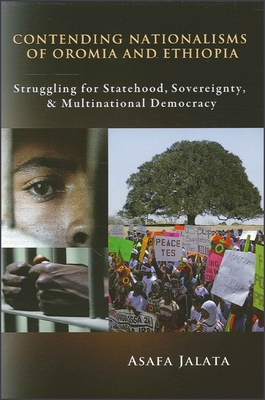 
Backordered - ETA Unknown
This book demonstrates how oppressor Ethiopian nationalism rationalizes and justifies the hierarchical organization of various peoples or ethnonations and how oppressed Oromo nationalism provides an ideology or a vision and a program for seeking self-determination and sovereignty by radically transforming the Ethiopian colonial state and its racist political structures and by promoting a multinational democracy. Since studies of nationalism are complicated by competing ideologies and interpretations, this work goes beyond the artificial boundaries of the social sciences and intellectual paradigms by employing interdisciplinary, multidimensional, and historical and comparative methods, and critical approaches that include political economy, multiculturalism, and critical theoretical and historical methodology. Professor Jalata has earned a reputation as one of the foremost authorities on Oromia and Ethiopia. His latest work applies the concept of oppressor and oppressed nationalisms to explore the historical forces and social processes that have shaped modern Ethiopia. His impeccable scholarship is matched by an admirable commitment to social justice. This is a masterful study, a must read for those who wish to understand politics in the Horn of Africa as well as the nature and role of contending nationalisms in the contemporary world capitalist system. William I. Robinson Professor of Sociology and Global and International Studies University of California at Santa Barbara Is ethnic nationalism compatible with democratic pluralism? Can there be racism between groups of the same skin color? Can a state take pride in being an Empire and still deny being imperialist? These are just three of the hotly controversial paradoxes addressed by this volume. Until the last quarter of the twentieth century the Ethiopian state took pride in its Emperor but denied being a colonial power. The fall of Emperor Haile Selassie in 1974 triggered a new awakening among the subject peoples of the Ethiopian state, among whom the Oromo are the largest and perhaps most articulate. This book powerfully examines the clash of nationalisms between the dominant Ethiopian elites and the newly assertive subordinate nations. The volume is enriched by comparative insights about other societies, by a cultural analysis of the Oromo heritage, and by a challenging exploration of how democracy in Africa can be indigenized. Ali A. Mazrui Albert Schweitzer Professor in the Humanities Director, Institue of Global Cultural Studies Professor of Political Science, African Studies and Philosophy, Interpretation and Culture Binghamton University, State University of New York.
Asafa Jalata is Professor of Sociology and Global Studies, and Interim Chair of the Africana Studies program at the University of Tennessee, Knoxville. Professor Jalata has published and edited seven books, including Oromummaa: Oromo Culture, Identity and Nationalism (2007), Oromia and Ethiopia (2005 [1993]), and Fighting Against the Injustice of the State and Globalization (2001). He also has published more than three-dozen refereed articles and book chapters. Professor Jalata is currently engaged in writing a book titled Faces of Terrorism in the Age of Globalization: From Christopher Columbus to Osama bin Laden.