The Feminist Revolution: The Struggle for Women's Liberation (Hardcover) 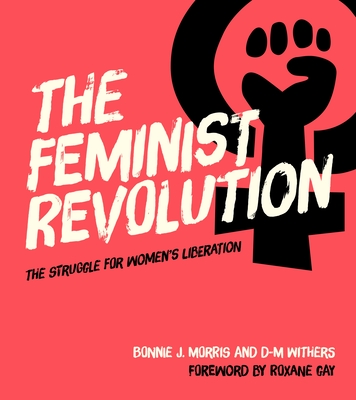 The Feminist Revolution: The Struggle for Women's Liberation (Hardcover)


Available in Warehouse. Wait for Email Confirmation for ETA
Explores the global history and contributions of the feminist revolution.

The Feminist Revolution offers an overview of women's struggle for equal rights in the late twentieth century. Beginning with the auspicious founding of the National Organization for Women in 1966, at a time when women across the world were mobilizing individually and collectively in the fight to assert their independence and establish their rights in society, the book traces a path through political campaigns, protests, the formation of women's publishing houses and groundbreaking magazines, and other events that shaped women's history. It examines women's determination to free themselves from definition by male culture, wanting not only to "take back the night" but also to reclaim their bodies, their minds, and their cultural identity. It demonstrates as well that the feminist revolution was enacted by women from all backgrounds, of every color, and of all ages and that it took place in the home, in workplaces, and on the streets of every major town and city. This sweeping overview of the key decades in the feminist revolution also brings together for the first time many of these women's own unpublished stories, which together offer tribute to the daring, humor, and creative spirit of its participants.
BONNIE J. MORRIS taught women's history for 22 years at both George Washington University and Georgetown, and is now a lecturer in the Gender and Women's Studies Department at UC-Berkeley. She is the award-winning author of 14 books, and a 17-year scoring reader for the AP U.S. History exam. D-M WITHERS is a writer, researcher, curator and publisher, who is currently Research Fellow at the University of Sussex. D-M's recent publications include Feminism, Digital Culture and the Politics of Transmission: Theory, Practice and Cultural Heritage, which won the 2016 Feminist and Women's Studies Association Book Prize. Curatorial projects include Music & Liberation and Sistershow Revisited.
OPRAH.COM - Best Book to Read, March 2018

O MAGAZINE
"An overview of intersectional politics and the rise of the second wave that reads like a punk rock zine."

BUSTLE
Bonnie J. Morris and D-M Withers take readers through a partial history of the push for women’s rights in The Feminist Revolution: Second Wave Feminism and the Struggle for Women’s Liberation. The book picks up in the 1960s and highlights key milestones, figures, events, and more. It's the perfect Women's History Month read.

KIRKUS REVIEWS, STARRED REVIEW
Richly illustrated, engagingly written history of second-wave feminism and successor movements from the 1960s to the present. [...] Essential for students of women's rights and popular political movements in the modern era and an inspiration for future actions.

BOOKLIST
This collection of essays, firsthand accounts, photos, and posters is equal parts highly readable prose and collector’s item. Morris, a women’s-studies professor, and Withers, a cultural theorist, have gathered critical components of the history of women’s resistance and presented them here for careful consumption. The language of the text is extremely informative and well researched. The authors are clear from the beginning that theirs is the narrative of the women’s-rights movement as it has been experienced in the U.S. and the UK, to avoid alienating other global initiatives. The images and media included range from campaign buttons to festival posters to inspirational artwork, all of which strengthen the power of the corresponding text. The book is divided into sections, the topics of which range from workplace equity to health care to sexuality to music. The authors stress the importance of an intersectional movement and urge readers to reach beyond their own biases as women or allies. Their book is a love letter to all the radical fighters who have come before.

LIBRARY JOURNAL
Much like a museum exhibition, this collection uses accessible text and rich visual materials that invite readers to explore in a nonlinear fashion. It will appeal to both those deeply familiar with the topic as well as beginners of this influential moment in feminist history.

CHOICE
Morris (gender and women's studies, Berkeley) and Withers (fellow, Univ. of Sussex, UK) provide a thematic history of the women’s movement in a text that is part visual anthology and part textbook. Despite largely focusing on feminist manifestations in the US and Britain, the authors take pains to incorporate international sources and events, most significantly through their inclusion of an array of visual sources—such as stamps, posters, flyers, and buttons—from countries including South Africa, Russia, China, Australia, Greece, and Belgium. The authors begin by discussing the movement and how it was mobilized, the movement’s political and ideological commitments, and feminism’s strong ties to the Civil Rights Movement and activism by women-of-color. Next, the authors tackle women’s reclamation of the physical and mental treatment of the body, sexuality and lesbian feminism, culture and the workplace, publishing and media, music and the arts, and the antiwar and antinuclear proliferation debates. They close with a discussion of the radicalization and fragmentation of the movement and the implications for the education of the next generation of feminists. Including a foreword by Roxane Gay, this text provides an excellent and engaging introduction to the feminist movement.