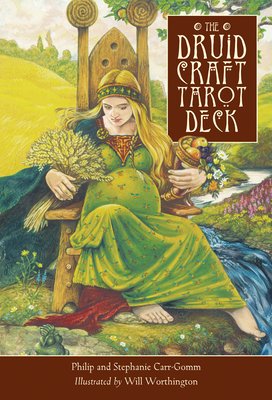 
Available in Warehouse. Wait for Email Confirmation for ETA
A classic tarot that brings two fundamental spiritualities of Nature―Wicca and Druidry―together in the ancient art.

Since its original publication in 2005, The Druid Craft Tarot has been a popular and highly recommended tarots. Blending the ancient traditions of the tarot with the imagery and wisdom of Nature-based spiritualities, The Druid Craft Tarot is a beautifully illustrated deck with a book to guide both beginners and long-standing practioners to a deeper reading.

Philip Carr-Gomm is one of the most prominent figures in the modern pagan community and is the past head of the largest international druid organization for almost thirty years. With his collaborators, Stephanie Carr-Gomm and Will Worthington, he has created a tarot that draws upon tarot's relationship to both druidry and wicca, drawing upon the primal essence that lies at the heart of each of these systems.  Included with the deck is an 80-page booklet.  The 78 tarot cards are beautifully illustrated by Will Worthington.

Philip Carr-Gomm is Chief of the Order of Bards, Ovates and Druids. Philip is the author of a number of works on Druidry, and since the publication of his first book in 1991 he has been in demand worldwide for radio, television and newspaper interviews.

Stephanie Carr-Gomm studied at Bath Academy of Art before travelling extensively. After returning to the UK she trained as a scenic artist at the Guildhall School of Music and Drama, and has since worked as a freelance artist for many theatre, opera and ballet companies. Stephanie administers the training programme of the Order of Bards, Ovates and Druids.

Will Worthington is a Grove leader of the Order of Bards, Ovates and Druids who has worked as an illustrator for the last 30 years. His interest in the ancient past and in Arthurian and Celtic mythology is reflected in his painting and drawing.