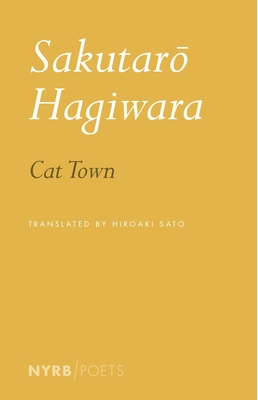 
Available in Warehouse. Wait for Email Confirmation for ETA
Modernist poet Sakutarō Hagiwara’s first published book, Howling at the Moon, shattered conventional verse forms and transformed the poetic landscape of Japan. Two of its poems were removed on order of the Ministry of the Interior for “disturbing social customs.” Along with the entirety of Howling, this volume includes all of Blue Cat, Hagiwara's second major collection, together with Cat Town, a prose-poem novella, and a substantial selection of verse from the rest of his books, giving readers the full breadth and depth of this pioneering poet's extraordinary work.
Sakutarō Hagiwara (1886–1942) was born in Maebashi, Gunma, the eldest of six children. His father was a successful physician, and Hagiwara enjoyed a sheltered and pampered childhood. At age fifteen he discovered literature and began writing classical tanka verse and publishing in literary magazines. As a young student he moved frequently throughout Japan, unable to finish college, prone to illness, and tormented by youthful lust. In Tokyo, he learned to play the mandolin and guitar, and upon returning to his hometown founded a musicians’ club called Gondola Western Music Society. By 1913, Hagiwara had abandoned classical metrical schemes in his poetry for free verse. He became a founding member of the Mermaid Poetry Society, worked as an editor at literary magazines, and in 1917 published his first book of poetry, Howling at the Moon, which was an immediate success and transformed modern Japanese verse forever. An arranged marriage in 1919 produced two daughters and ended ten years later with his wife eloping with her dance partner; a second marriage in 1938 lasted a year, again with his wife fleeing. His mother is quoted as saying, “He spent all his income from his writing on booze. He was good for nothing, but with all that drinking, he neither increased nor decreased the family money.” After turning to essays and aphorisms for several years, Hagiwara eventually published his second poetry collection, Blue Cat, in 1923. These two books of poems—noted for their sensual philosophy, intimate gloom, symbolist imagery, riveting self-exploration, and confessions of vulgar secrets that blended the literary with the daily vernacular—marked the peak of Hagiwara’s creative heights. Of his writing process, Hagiwara wrote to a friend, “I am merely catching a kind of rhythm that flows at the bottom of my heart and unconsciously pursuing the rhythm, therefore at the time of creation my own self is merely something like a half-conscious automatic machine.” He would go on to write four more books of poems and prose poems, as well as other collections of essays. Hagiwara taught at Meiji University from 1934 until his death from pneumonia at the age of fifty-five.

Hiroaki Sato is the author of Snow in a Silver Bowl: A Quest for the World of Yugen and One Hundred Frogs: From Renga to Haiku to English, among other books. He is a contributor to a greatly expanded adaptation of Naoki Inose’s Persona: A Biography of Yukio Mishima, and the co-editor with Burton Watson of the landmark volume From the Country of Eight Islands: An Anthology of Japanese Poetry, which won the PEN American Center Translation Prize. Sato has translated three dozen books of Japanese literature and poetry, most recently, The Iceland by Sakutarō Hagiwara and, with Nancy Sato, So Happy to See Cherry Blossoms: Haiku from the Year of the Great Earthquake and Tsunami. He has also translated various American poets into Japanese, among them John Ashbery, Charles Reznikoff, and Jerome Rothenberg. Since 2000 Sato has written a regular column for The Japan Times.
"A short, indispensable collection of sometimes crushingly sad poems from a Japanese master, expertly translated. Ignoring Hagiwara is like ignoring Eliot, except maybe worse." —Flavorwire

“Sakutarō Hagiwara is the ultimate modern Japanese poet–the first to perfect the use of colloquial language as a medium for poetic expression. Always rhythmic, his poetry represents a scintillating verbal and spiritual adventure, particularly in the lucid and elegant translations created
by Hiroaki Sato.” —J. Thomas Rimer

“Sakutarō Hagiwara is not just the most influential poet of his generation–his body of radically expressive work inspires the most innovative Japanese poets writing today. He is the big cheese, and Hiroaki Sato, the master translator, has the gifts necessary to render his incomparably sharp taste.”   —Forrest Gander