The Epic of Gesar of Ling: Gesar's Magical Birth, Early Years, and Coronation as King (Hardcover) 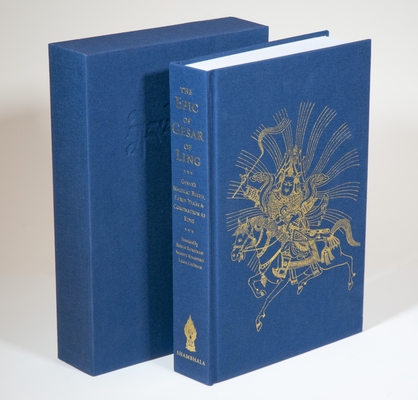 The Epic of Gesar of Ling: Gesar's Magical Birth, Early Years, and Coronation as King (Hardcover)


This title is likely unavailable. Email or call for price and availability.
The Gesar of Ling epic is the Tibetan equivalent of The Arabian Nights. For hundreds of years, versions of it have been known in oral and written form in Tibet, China, Central Asia, and across the eastern Silk Route. King Gesar, renowned throughout these areas, represents the ideal warrior. As a leader with his people's loyalty and trust, he conquers all their enemies and protects the peace. His life story, which is full of miracles and magic, is an inspiration and a spiritual example to the people of Tibet and Central Asia even today; Gesar's warrior mask can be seen in the town square and on the door of homes in towns and villages throughout this area.
As a Buddhist teaching story, the example of King Gesar is also understood as a spiritual allegory. The "enemies" in the stories represent the emotional and psychological challenges that turn people's minds toward greed, aggression, and envy, and away from the true teachings of Buddhism. These enemies graphically represent the different manifestations of the untamed mind. The teaching is that genuine warriors are not aggressive, but that they subjugate negative emotions in order to put the concerns of others before their own. The ideal of warriorship that Gesar represents is that of a person who, by facing personal challenges with gentleness and intelligence, can attain spiritual realization. This book contains volumes one through three, which tell of Gesar's birth, his mischievous childhood, his youth spent in exile, and his rivalry for the throne with his treacherous uncle.
The Gesar epic tells how the king, an enlightened warrior, in order to defend Tibet and the Buddhist religion from the attacks of surrounding demon kings, conquers his enemies one by one in a series of adventures and campaigns that take him all over the Eastern world. He is assisted in his adventures by a cast of heroes and magical characters who include the major deities of Tibetan Buddhism as well as the native religion of Tibet. Gesar fulfills the Silk Route ideal of a king by being both a warrior and a magician. As a magician he combines the powers of an enlightened Buddhist master with those of a shamanic sorcerer. In fact, at times the epic almost seems like a manual to train such a Buddhist warrior-magician.
In the story, the people and nation of Ling represent the East Asian notion of an enlightened society. There, meditation, magic, and the oral folk wisdom of a communal nomadic society are synchronized in a lifestyle harmonious with the environment, but ambitious for growth and learning and refined literate culture. Filled with magic, adventure, and the triumphs of this great warrior-king, the stories will delight all—young and old alike.
The Gesar epic is still sung by bards in Tibet. The words of the Gesar epic have never been translated into a Western language before.
ROBIN KORNMAN (1947-2007) is best known for his work as a Tibetan Buddhist scholar, as well as for being a founding member of the Nalanda Translation Committee. Up until his death, he spent many years working on this translation of the epic of Gesar. A longtime student of Chögyam Trungpa Rinpoche, he earned his PhD from Princeton University and was a professor of comparative literature at the University of Wisconsin, Milwaukee. SANGYE KHANDRO has translated many important Tibetan Buddhist texts. She is a cofounder of Light of Berotsana, a nonprofit organization for translators of Tibetan texts. LAMA CHÖNAM is a Tibetan teacher who received twenty years of traditional training as a monk in Tibet. He is a translator and adviser to the Nalanda Translation Committee and a cofounder of Light of Berotsana.
“The Gesar story is one of the Tibetan people’s most popular epics, its stories being enacted and sung at festivals and on important ceremonial occasions. By making the epic of Gesar available in English, the translators are offering the modern reader a chance to experience the particular character of this Tibetan tradition that has brought hope and fortitude to many generations across the Tibetan-speaking world.”—from the foreword by His Holiness the Fourteenth Dalai Lama

“The timing [of this book] could not be better. As our modern world experiences a loss of heart and humanity, and climactic changes and disasters occur, we need the compassionate, wise, and potent energy of Gesar more than ever.”—from the foreword by Sakyong Mipham Rinpoche