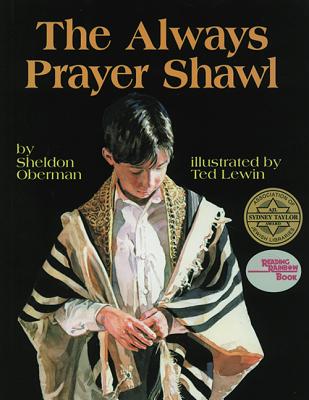 
This title is likely unavailable. Email or call for price and availability.
"Some things change. And some things don't."
That simple truth, whispered in a synagogue, echoes throughout this deeply felt picture book. Adam, a young Jewish boy in czarist Russia, must flee his ancestral home at the outbreak of the revolution. Before he sets sail for a new land, his grandfather gives him a prayer shawl that was handed to him by his own grandfather, who was also named Adam. And so the life of Adam and his prayer shawl unfolds from time past to time present, when Adam has a grandson of his own. Some things change and some things don't. Sheldon Oberman's picture book about the strength of tradition and the passing of generations is given powerful expression in Ted Lewin's atmospheric illustrations.
Sheldon Oberman's books include "By the Hanukkah Light, The Wisdom Bird, "and "Lion in the Lake, "a French-English alphabet book that won the silver medal at the Leipzig International Children's Book Fair.

Ted Lewin has illustrated more than one hundred books for children and also wrote an autobiography entitled "I Was a Teenage Professional Wrestler. "He lives in Brooklyn, New York, with his wife, Betsy, who also illustrates children's book.