The Soul of Gold: Tales from a Japanese Metal Artist’s Studio (Hardcover) 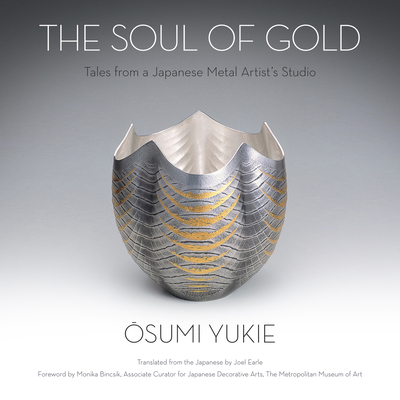 The Soul of Gold: Tales from a Japanese Metal Artist’s Studio (Hardcover)


This title is likely unavailable. Email or call for price and availability.
From the Introduction to the Artist from the Onishi Gallery: In this groundbreaking book, Osumi Yukie tells the story of more than five decades’ engagement with metal art, introducing us to her creative world from the perspective of Holder of an Intangible Cultural Property, an official title popularly known as “Living National Treasure.” She has the distinction of being the very first woman to receive this honor for high achievement in the field of metalwork since the system was first established by the Japanese government in 1955. One of the more important missions of a Living National Treasure is to foster national and international appreciation of Japan’s traditional cultural assets. In this regard, Osumi has been exceptionally active as a cultural ambassador, not only lecturing, exhibiting, and demonstrating in Europe and the United States but also using her role as a female creative leader to communicate with women globally, encouraging them to follow her example and make their mark in the world of art. Unlike many of their Western counterparts, Japanese artists tend to focus on a single material as their primary means of expression. This material can be clay, lacquer, textile, paper, wood, bamboo, or, in Osumi’s case, metal. Her diligent study and profound understanding of many different metals and metal alloys empowers her to give them a feeling of softness and warmth, exploiting these unexpected properties to create colorful mindscapes that transform the characteristics of her chosen medium. The viewer cannot being captivated by her intricate creations, with their ability to create a universe so vast that we may never be able to fully grasp the meditative processes underlying a piece’s creation, a feature that gives her work an additional appeal and sense of mystery. Japanese contemporary metal art is relatively new to foreign audiences, including both museum visitors and individual collectors.
Osumi Yukie is the first woman metalsmith in Japan to be designated a Living National Treasure (Holder of an Important Intangible Cultural Property) for her accomplishments in the field of metalwork. She is also the first artist to be awarded a Residency in Japanese Metalwork Design at the Freer and Sackler Galleries. Recognized for her artistic and technical skills, Osumi has mastered the demanding technique of metal inlay known as nunome zogan. On the silver vessel forms that she shapes by hand, Osumi uses customized chisels to add a textured ground for inlays of gold and lead foils. The cloth-like texture holds the inlay in place. Polishing adds shading and depth to the silver and lead tonalities and brings out the unchanging brilliance of the gold. Osumi appreciates the varied metals for the evocative qualities of their colors, a connection that she believes reaches far back in the Japanese connoisseurship of metalwork. As seen in these works, her recurrent design themes evoke the elusive patterns of roiling waves and wind sweeping over the surface of water or through mist and clouds. The counterpoint of hammered texture and inlaid motifs on the vessel’s undulating surface seems to defy material rigidity as it conveys passing moments in nature.