The Prince of Tennis, Vol. 7 (Paperback) 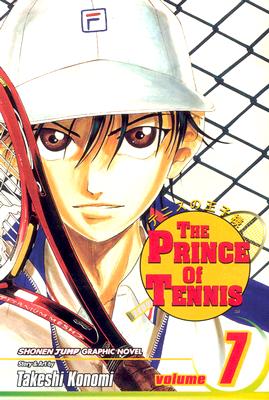 The Prince of Tennis, Vol. 7 (Paperback)

This is book number 7 in the The Prince of Tennis series.

As the road to the Nationals narrows, Seishun Academy squares off with St. Rudolph. Through the maneuverings of Hajime, Saint Rudolph's cunning manager, Ryoma gets matched up with Yuta-known to many as "Lefty Killer." With an unorthodox game laced with reverse spins and angles, Yuta's game ignites against the seemingly inexperienced-against-lefties Ryoma. Meanwhile, the Seishun doubles tandem of Eiji and Shuichiro assume the Australian formation to break a tie. Is this a desperate attempt to win, or a well-calculated strategy?
Takeshi Konomi exploded onto the manga scene with the incredible The Prince of Tennis. His refined art style and sleek character designs proved popular with Weekly Shonen Jump readers, and The Prince of Tennis became the number one sports manga in Japan almost overnight. Its cast of fascinating male tennis players attracted legions of female readers even though it was originally intended to be a boys' comic. The manga continues to be a success in Japan and has inspired a hit anime series, as well as several video games and mountains of merchandise.