The Prince of Tennis, Vol. 9 (Paperback) 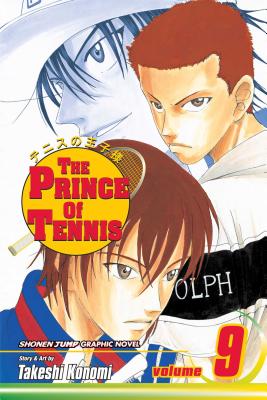 The Prince of Tennis, Vol. 9 (Paperback)

This is book number 9 in the The Prince of Tennis series.

The much-anticipated match between Seishun Academy 's Ryoma Echizen and St. Rudolph's Yuta is underway, and neither of them is giving in to each other's intimidation techniques. Upon orders from Hajime, St. Rudolph's cunning team manager, Yuta must aim for Ryoma's left eye, which was accidentally injured during his previous match. Battling all odds to secure his team's victory--as well as his own on-court safety--can Ryoma formulate a strategy to tame Yuta's killer twist spin shot? And is Yuta really that evil?
Takeshi Konomi exploded onto the manga scene with the incredible The Prince of Tennis. His refined art style and sleek character designs proved popular with Weekly Shonen Jump readers, and The Prince of Tennis became the number one sports manga in Japan almost overnight. Its cast of fascinating male tennis players attracted legions of female readers even though it was originally intended to be a boys' comic. The manga continues to be a success in Japan and has inspired a hit anime series, as well as several video games and mountains of merchandise.