Bonobo Handshake: A Memoir of Love and Adventure in the Congo (Paperback) 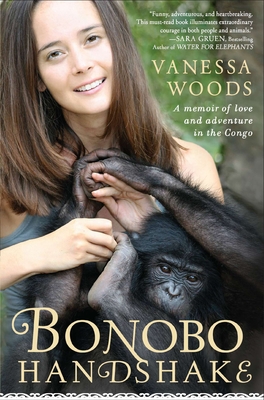 Bonobo Handshake: A Memoir of Love and Adventure in the Congo (Paperback)

“This memoir left me wanting to donate all my money to Friends of Bonobos. Vanessa has captured the spirit of an animal that so many of us now nothing about. Her writing drew me in from page one and the research about the civil war in the Congo region was just the right amount to not feel like you were reading a history book about the Congo, but enough so you could completely understand the impact that it has had on the Bonobo's. I can't wait for this to come out and for people to be made aware of her cause. I haven't read a non-fiction book before that I felt so drawn to be part of their cause.”
— Sarah Galvin, The Bookstore Plus, Lake Placid, NY

A young woman follows her fiancé to war-torn Congo to study extremely endangered bonobo apes-who teach her a new truth about love.

In 2005 Vanessa Woods accepted a marriage proposal from a man she barely knew and agreed to join him on a research trip to the war-torn Democratic Republic of Congo. Settling in at a bonobo sanctuary in Congo's capital, Vanessa and her fiancé entered the world of a rare ape with whom we share 98.7 percent of our DNA and who live in a peaceful society in which females are in charge, war is nonexistent, and sex is as common and friendly as a handshake.

A fascinating memoir of hope and adventure, Bonobo Handshake traces Vanessa's self-discovery as she finds herself falling deeply in love with her husband, the apes, and her new surroundings in this true story of revelation and transformation in a fragile corner of Africa.
Vanessa Woods is a research assistant, journalist, and author of children’s books. A member of the Hominoid Psychology Research Group, she works with Duke University as well as Lola Ya Bonobo in Congo. She is also a feature writer for the Discovery Channel, and her writing has appeared in publications such as BBC Wildlife and Travel Africa. Her first book, It’s Every Monkey for Themselves, was published in Australia in 2007. Woods lives in North Carolina with her husband, scientist Brian Hare.