Almost Nothing, Yet Everything: A Book about Water (Hardcover) 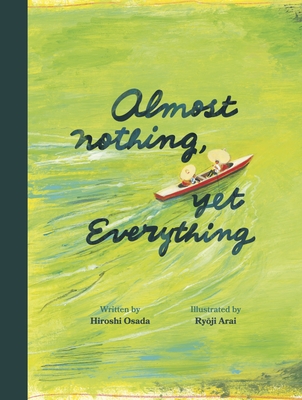 Almost Nothing, Yet Everything: A Book about Water (Hardcover)


Available in Warehouse. Wait for Email Confirmation for ETA
Existing in myriad forms, containing multitudes in its reflection, and coursing through each and every one of us, water sustains the world around us--and life itself.

A USBBY Outstanding International Book of 2022

Artist Ryōji Arai and poet Hiroshi Osada, the Japanese team behind critically acclaimed Every Color of Light, offer up another meditation on the natural world in this ode to water. A lyrical moment between parent and child in a boat on a river unfolds into an examination of the water that surrounds them, and the nature and life sustained by it: "It's only oxygen and hydrogen. Simple as could be, and yet nothing means more to life as we know it."

Arai's lush art and Osada's evocative poetry, beautifully translated from Japanese by David Boyd, work together to enchant readers and refresh their spirit, opening their eyes to the wonders of water, the universe, and life.

Hiroshi Osada debuted as a poet with This Journey. In 2000, his first collaboration with Ryōji Arai, A Forest Picture Book, earned the Kōdansha Publishing Culture Award for Children's Literature.Ryōji Arai was born in Yamagata, Japan, in 1956. He has an illustrative style all of his own: bold, mischievous and unpredictable. Arai studied art at Nippon University. His art is at once genuine and truly poetic, encouraging children to paint and to tell their own stories. He took the Japanese picture-book world by storm in the 1990s. Since then, he has one multiple awards, including the international Astrid Lindgren Memorial Award in 2005.David Boyd is Assistant Professor of Japanese at the University of North Carolina at Charlotte. His translations have appeared in Monkey Business International, Granta, and Words Without Borders, among other publications.