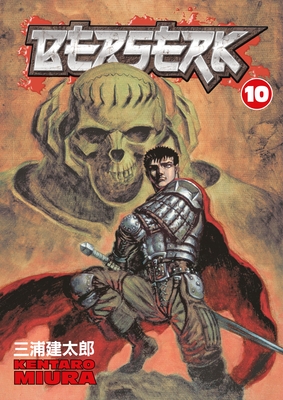 This is book number 10 in the Berserk series.

Warrior supreme Guts has returned, and just in time to save the weakened Band of the Hawk from certain destruction… and to form an intimate bond with the beautiful warrior Casca. But job one is to find a way to free Griffith, the Hawks' leader, from the dank dungeons and round-the-clock tortures of the Hawks' former benefactor, the King of Midland. But while the flayed and starved Griffith may be in isolation, he is not alone. Horrors beyond imagination await Guts and the Hawks in the catacombs, and those who die may just be the lucky ones!
While attending college at Nihon University, in 1988, Kentaro Miura debuted a 48-page manga known as Berserk Prototype, an introduction to the current Berserk fantasy world. It went on to win Miura a prize from the Comi Manga School. In 1989, after receiving a doctorate degree, Kentarou started a project titled King of Wolves based on a script by Buronson, writer of Hokuto no Ken (Fist Of The North Star).