American Vulgar: The Politics of Manipulation Versus the Culture of Awareness (Paperback) 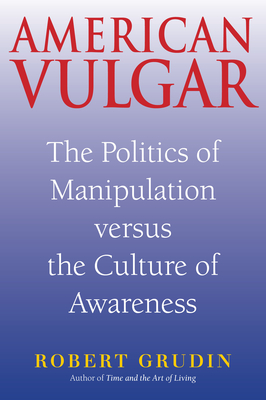 By Robert Grudin
$15.00
Not Currently Available to Order

Robert Grudin is a lyrical philosopher. From Time and the Art of Living to The Grace of Great Things and On Dialogue, he has tackled the traditional subjects of classic philosophy with a beautiful prose style in work fueled by American pragmatism and metaphysical exploration. In American Vulgar, Grudin examines postwar developments in American social consciousness, as we have veered from the nineteenth-century ideal of the commonwealth to the contemporary fixation on the individual -- what others have described as the culture of narcissism. Grudin identifies how easily misled individuals can be by a class of professional manipulators -- politicians, marketers, advertisers, and the like. He demonstrates the calculated effort to diminish and demean broad national awareness, a project of vulgarization. Illustrating its effects in several areas of common daily life, he shows how this dumbing-down of the electorate has bred an epidemic and self-destructive ignorance. Grudin believes that only a rebirth of individual awareness can repair this damage and in this book sets about to explore the avenues renewed consciousness may take to save individuals from the death of mass vulgarity. American Vulgar paints a distressing portrait, but leaves us with hope, offering several possibilities for repair and salvation.

Robert Grudin is a writer and philosopher, and the author of the metafictional novel Book, as well as Mighty Opposites: Shakespeare and Renaissance Contrariety, The Grace of Great Things: Creativity and Innovation, On Dialogue: An Essay in Free Thought, Time and the Art of Living, The Most Amazing Thing, and American Vulgar: The Politics of Manipulation Versus the Culture of Awareness. He holds a Ph.D. in comparative literature from the University of California, Berkeley and received a Guggenheim Fellowship.