The Permission Society: How the Ruling Class Turns Our Freedoms Into Privileges and What We Can Do about It (Hardcover) 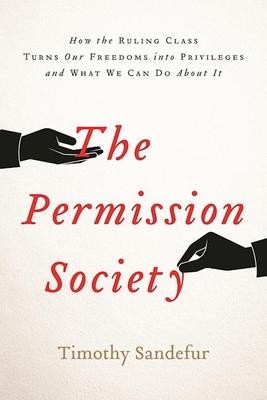 The Permission Society: How the Ruling Class Turns Our Freedoms Into Privileges and What We Can Do about It (Hardcover)


Available in Warehouse. Wait for Email Confirmation for ETA
Throughout history, kings and emperors have promised "freedoms" to their people. Yet these freedoms were really only permissions handed down from on high. The American Revolution inaugurated a new vision: people have basic rights to life, liberty, and the pursuit of happiness, and government must ask permission from them. Sadly, today's increasingly bureaucratic society is beginning to turn back the clock and to transform America into a nation where our freedoms--the right to speak freely, to earn a living, to own a gun, to use private property, even the right to take medicine to save one's own life--are again treated as privileges the government may grant or withhold at will. Timothy Sandefur examines the history of the distinction between rights and privileges that played such an important role in the American experiment, and how we can fight to retain our freedoms against the growing power of government. Illustrated with dozens of real-life examples--including many cases he litigated himself--Sandefur shows how treating freedoms as government-created privileges undermines our Constitution and betrays the basic principles of human dignity.

Timothy Sandefur is Vice President for Litigation at the Goldwater Institute. Before joining Goldwater, he served 15 years as a litigator at the Pacific Legal Foundation, where he won important victories for economic liberty in several states. He is the author of Cornerstone of Liberty: Property Rights in 21st-Century America (coauthored with Christina Sandefur, 2016), The Right to Earn a Living (2010), and The Conscience of the Constitution (2014), as well as dozens of scholarly articles on subjects ranging from eminent domain and economic liberty to antitrust, copyright, slavery and the Civil War, and political issues in Shakespeare, ancient Greek drama, and Star Trek. He is an Adjunct Scholar with the Cato Institute and a graduate of Hillsdale College and Chapman University School of Law.