What to Do about the U.N. (Encounter Broadsides #50) (Paperback) 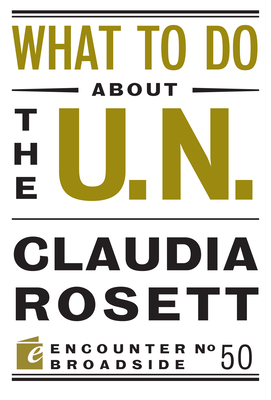 What to Do about the U.N. (Encounter Broadsides #50) (Paperback)


Available in Warehouse. Wait for Email Confirmation for ETA
The United Nations is failing abysmally, and dangerously, in its mission. Founded in 1945 as a vehicle to avert war and promote human dignity and freedom, the U.N. has instead become a self-serving and ever-expanding haven of privilege for the world's worst regimes, rife with bigotry, fraud, abuse, and corruption, both financial and moral. Yet the American foreign policy community treats it as taboo to speak seriously about sidelining, supplanting, or leaving the U.N. The usual argument is that the U.N. may be imperfect, but it's all we've got. In this Broadside, Claudia Rosett explains why the U.N.'s basic design means it cannot really be reformed and why it is becoming ever more urgent to seek alternatives. Rosett argues that it's time to break the taboo, and to bring fully into America's foreign policy debates the question of how to dispense with the U.N. altogether.
Claudia Rosett, a prize-winning journalist for her reporting on the United Nations, and a former editorial writer and foreign correspondent for the Wall Street Journal, is currently a foreign policy fellow with the Independent Women's Forum.