The Fracturing of the E.U. (Encounter Broadsides #53) (Paperback) 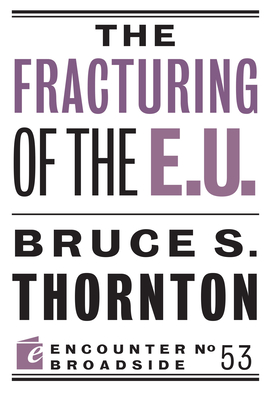 The Fracturing of the E.U. (Encounter Broadsides #53) (Paperback)


Available in Warehouse. Wait for Email Confirmation for ETA
The long-simmering crises challenging the European Union have worsened with the 2008 financial crisis, the influx of Middle East refugees in 2015, several bloody terrorist attacks, and England's departure from the E.U. in 2016. Yet these are all the wages of persistent flaws in the idea of the Union itself. Excessive regulations, welfare, and taxes impede economic growth. Centralization of power in Brussels has created a "democracy deficit" and lessened autonomy and freedom. Populations are shrinking, and unvetted and unassimilated migrants have increased crime and terrorist attacks. All these problems reflect the lack of any unifying set of beliefs and principles that could unite 27 diverse cultures and peoples. Europe is fractured and adrift, its peoples unsure for what they should fight or die for.
Bruce S. Thornton is a Research Fellow at Stanford's Hoover Institution, and a Shillman Fellow at the David Horowitz Freedom Center. His latest book is Democracy's Dangers and Discontents: The Tyranny of the Majority from the Greeks to Obama.