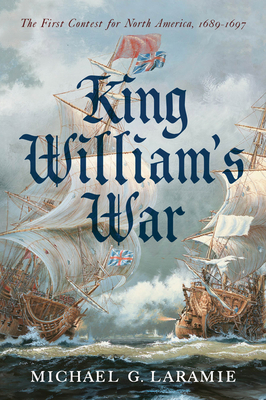 
This title is likely unavailable. Email or call for price and availability.
Winner of the New York Society of Colonial Wars Annual Book Award
Fought in New York, New England, and Canada, the Conflict that Began the Long French and English Struggle for the New World
While much has been written on the French and Indian War of 1754–1763, the colonial conflicts that preceded it have received comparatively little attention. Yet in King William’s War, the first clash between England and France for control of North America, the patterns of conflict for the next seventy years were laid, as were the goals and objectives of both sides, as well as the realization that the colonies of the two nations could not coexist.
King William’s War actually encompassed several proxy wars being fought by the English and the French through their native allies. The Beaver Wars was a long running feud between the Iroquois Confederacy, New France, and New France’s native allies over control of the lucrative fur trade. Fueled by English guns and money, the Iroquois attempted to divert the French fur trade towards their English trading partners in Albany, and in the process gain control over other Indian tribes. To the east the pro-French Wabanaki of Maine, Nova Scotia, and New Brunswick had earlier fought a war with New England, but English expansion and French urgings, aided by foolish moves and political blunders on the part of New England, erupted into a second Wabanaki War on the eve of King William’s War. Thus, these two conflicts officially became one with the arrival of news of a declaration of war between France and England in 1689. The next nine years saw coordinated attacks, including French assaults on Schenectady, New York, and Massachusetts, and English attacks around Montreal and on Nova Scotia. The war ended diplomatically, but started again five years later in Queen Anne’s War.
A riveting history full of memorable characters and events, and supported by extensive primary source material, King William’s War: The First Contest for North America, 1689–1697 by Michael G. Laramie is the first book-length treatment of a war that proved crucial to the future of North America.
MICHAEL G. LARAMIE is the author of The European Invasion of North America: Colonial Conflict Along the Hudson-Champlain Corridor, 1609–1760 and By Wind and Iron: Naval Campaigns in the Champlain Valley, 1665–1815 (Westholme 2014). He lives with his family in Arizona.
“[Laramie’s] analysis of the external and internal dynamics and sophisticated politics of indigenous confederacies provides depth and an understanding of the complicated factors at work. Similarly, insights into how the home politics of the European rivals influenced the outcome of the North American war also gives helpful perspective. Laramie credits France with winning this war, but indicts their overconfidence following the victory as a key factor in their loss to the English in the French and Indian War 100 years later. Laramie’s straightforward, well-organized effort should interest readers with a taste for colonial history and detailed martial narratives.”—Publishers Weekly

“Michael G. Laramie has written the only modern study of King William’s War. . . . With well-chosen illustrations and helpful maps, the book provides a detailed look at the earliest “French and Indian War” (also known as the War of the League of Augsburg) involving not only European powers, but also colonists and native inhabitants. . . . Laramie’s book is well researched and organized, written in a clear narrative style. . . . Readers will no doubt enjoy this study that provides a much-needed account of an important conflict.”—Army History

“In his comprehensively researched and detailed accounting of an eight-year period of Colonial North American history characterized by Native American and European struggles to control trade, Laramie focuses on the French, English, and Dutch power dynamics brought to the New World and their impact on relations and interactions with the various Native American nations in the northeastern region of North America. The author’s precise writing style provides important contextual background to the years leading up to the more often studied French and Indian War. The tightly written chapters divide the history into manageable bites, covering the Native American narrative of the Iroquois, Huron, Wabanaki, and many other nations, as well as chronicling the English, French, and Dutch attempts to control and dominate the valuable fur trade. An extensive notes section, bibliography, and index allow students and scholars to easily navigate this-well researched book.”—Choice

“Laramie fills an important gap in historiography with this, the first extended study of King William’s War in well over a century. He places the 1689-1697 war in context by devoting a third of the text to the Indian, Dutch, French, and English conflicts of the seventeenth century. Clearly and concisely written, Laramie convincingly argues that France did not so much win King William’s War as England lost it. The lack of unity among the English colonies, the focus of officials in London on the Caribbean, and ‘a lack of will’ to win by Englishmen on both sides of the Atlantic all contributed to their defeat.”—James C. Bradford, professor of American history, Texas A&MUniversity, and author of America, Sea Power, and the World