Science and Psychic Phenomena: The Fall of the House of Skeptics (Paperback) 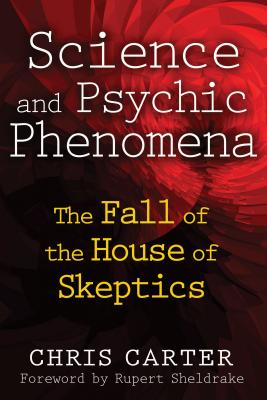 Science and Psychic Phenomena: The Fall of the House of Skeptics (Paperback)


Available in Warehouse. Wait for Email Confirmation for ETA
A factual and conscientious argument against materialism’s vehement denial of psi phenomena

Reports of psychic abilities, such as telepathy, clairvoyance, precognition, and psychokinesis, date back to the beginning of recorded human history in all cultures. Documented, reproducible evidence exists that these abilities are real, yet the mainstream scientific community has vehemently denied the existence of psi phenomena for centuries. The battle over the reality of psi has carried on in scientific academies, courtrooms, scholarly journals, newspapers, and radio stations and has included scandals, wild accusations, ruined reputations, as well as bizarre characters on both sides of the debate. If true evidence exists, why then is the study of psi phenomena--parapsychology--so controversial? And why has the controversy lasted for centuries?

Exploring the scandalous history of parapsychology and citing decades of research, Chris Carter shows that, contrary to mainstream belief, replicable evidence of psi phenomena exists. The controversy over parapsychology continues not because ESP and other abilities cannot be verified but because their existence challenges deeply held worldviews more strongly rooted in religious and philosophical beliefs than in hard science. Carter reveals how the doctrine of materialism--in which nothing matters but matter--has become an infallible article of faith for many scientists and philosophers, much like the convictions of religious fundamentalists. Consequently, the possibility of psychic abilities cannot be tolerated because their existence would refute materialism and contradict a deeply ingrained ideology. By outlining the origin of this passionate debate, Carter calls on all open-minded individuals to disregard the church of skepticism and reach their own conclusions by looking at the vast body of evidence.
Chris Carter received his undergraduate and master’s degrees from the University of Oxford. He is the author of Science and Psychic Phenomena and Science and the Near-Death Experience. Originally from Canada, Carter currently teaches internationally.

Rupert Sheldrake is a biologist, a former research fellow of the Royal Society at Cambridge, a current fellow of the Institute of Noetic Sciences near San Francisco, and an academic director and visiting professor at the Graduate Institute in Connecticut. He received his Ph.D. in biochemistry from Cambridge University and was a fellow of Clare College, Cambridge University, where he carried out research on the development of plants and the ageing of cells. He is the author of more than eighty scientific papers and ten books, including Dogs That Know When Their Owners Are Coming Home; Morphic Resonance; The Presence of the Past; Chaos, Creativity, and Cosmic Consciousness; The Rebirth of Nature; and Seven Experiences That Could Change the World. In 2019, Rupert Sheldrake was cited as one of the "100 Most Spiritually Influential Living People in the World" according to Watkins Mind Body Spirit magazine.
“Chris Carter is a one-man wrecking crew for the time-worn, tedious, petulant, and often flimsy complaints of the die-hard skeptics. A science of consciousness is doomed to be incomplete without taking Carter’s keen insights into account.”
— Larry Dossey, M.D., author of Healing Words and The Power of Premonitions

“Carter confronts legitimate criticism with solid scientific evidence and deftly exposes the anti-science stand of the dogmatic skeptics. He makes a compelling case for taking the science of parapsychology seriously. . . . A must-read for anyone interested in the true state of this important debate.”
— Richard Broughton, Ph.D., author of Parapsychology: The Controversial Science and senior lecturer in

“The controversy surrounding psychic phenomena (psi) is both long and complicated. Chris Carter reviews the many elements of the controversy in great detail, but in a manner that is also readable and entertaining--a difficult feat. I found his explanation of quantum theories of psi, for example, exceptionally clear, and it resolved some confusion I had about these theories from reading other sources. Carter adheres strictly to valid scientific and philosophical principles in arguing for the reality of psi and the legitimacy of parapsychology as a science--no retreat into New Age metaphysical mumbo jumbo--and he doesn’t overstate his case. Any reader who can approach this controversial subject with an open mind will find Carter’s book immensely rewarding.”
— John Palmer, Ph.D., editor of Journal of Parapsychology and coauthor of Foundations of Parapsycholog

“I highly recommend this book to anyone who is truly open-minded about whether or not psychic abilities exist. Chris Carter takes the reader on an insightful journey that weaves together history, scientific data, modern physics, psychology, and philosophy of science. He convincingly shows that it’s now possible to replace belief-based opinion with solid science when discussing the possible reality of psychic phenomena.”
— Jessica Utts, Ph.D., professor of statistics, University of California, Davis, and author of An Asse

“Chris Carter has put together quite a treatise. In thoroughly readable, engaging, and clear prose, he provides an erudite and comprehensive review of the skeptical and scientific studies of events that don’t fit present paradigms. Despite having researched the subject extensively myself, I found a deep well of new information. Carter’s book is both scholarly and entertaining.”
— Robert S. Bobrow, M.D., clinical associate professor of family medicine at Stony Brook University an

“This book is a must have for any serious paranormal researcher and I would recommend it to anyone to open their eyes and learn about why the paranormal always seems to be getting such a bad wrap. It was an eye opener of education and wisdom and knowledge and I could easily read it again and again...”
— Examiner.com

“Carter methodically and masterfully reveals that the skeptic’s position is increasingly untenable. . . . A refreshingly rational and well written investigation of the science of psi.”
— Dean Radin, Ph.D., senior scientist at the Institute of Noetic Sciences

“Chris Carter’s Science and Psychic Phenomena is a must read for anyone who wishes to penetrate the distortions and lies of the skeptics regarding psychic phenomena. Clearly written, and a pleasure to read!”
— Neal Grossman, Ph.D., professor emeritus, University of Illinois at Chicago