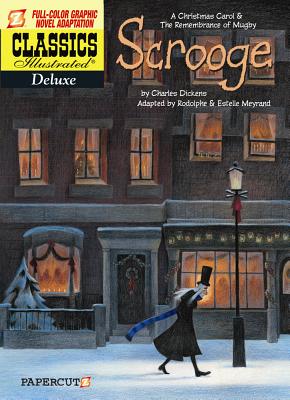 You may know the Ghosts of Christmas Past, Present, and Future from Charles Dickens' beloved tale, A Christmas Carol, but did you know this is not Dickens' only ghost story? This edition of Classics Illustrated Deluxe presents A Christmas Carol together with another one of Dickens' treasures, Mugby Junction, which also features elements of the supernatural and a protagonist to whom his future is revealed. Estelle Meyrand's Expressionist artwork brings a rich palette and dynamism to these two classic Christmas tales by one of the world's greatest authors.

Considered by many to be the greatest novelist of the English language, Charles John Huffam Dickens was born February 7, 1812, in Portsmouth, England. Some of his most popular works include Oliver Twist, David Copperfield, Nicholas Nickleby, A Tale of Two Cities and Great Expectations.

“Classics Illustrated always had the goods. Looks like it still does.” —NEWSWEEK