A Symphony of Echoes: The Chronicles of St. Mary's Book Two (Paperback) 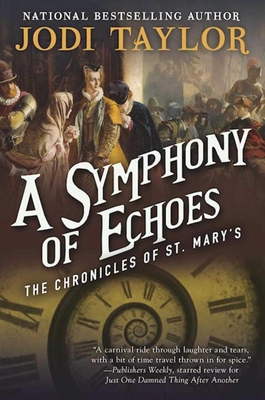 A Symphony of Echoes: The Chronicles of St. Mary's Book Two (Paperback)


Available in Warehouse. Wait for Email Confirmation for ETA
Join Madeleine Maxwell and the historians at St. Mary’s Institute of Historical Research as they study history first-hand, travelling to back in time to study Jack the Ripper, Thomas Becket, and more.

Behind the seemingly innocuous facade of St. Mary’s Institute of Historical Research, a different kind of academic work is taking place. Just don’t call it “time travel”—these historians “investigate major historical events in contemporary time.” And they aren’t your harmless eccentrics either; a more accurate description, as they ricochet around history, might be unintentional disaster-magnets.

The Chronicles of St. Mary’s tells the chaotic adventures of Madeleine Maxwell and her compatriots—Director Bairstow, Leon “Chief” Farrell, Mr. Markham, and many more—as they travel through time, saving St. Mary’s (too often by the very seat of their pants) and thwarting time-travelling terrorists, all the while leaving plenty of time for tea.

In the sequel to Just One Damned Thing After Another, Max and company visit Victorian London in search of Jack the Ripper, witness the murder of Archbishop Thomas Becket in Canterbury Cathedral, and discover that dodos make a grockling noise when eating cucumber sandwiches. But they must also confront an enemy intent on destroying St. Mary’s—an enemy willing, if necessary, to destroy history itself to do it.
Jodi Taylor is, and always has been, a history nut. Her Chronicles of St. Mary’s, a wild mix of history, adventure, comedy, romance, tragedy, and anything else the author could think of, began as a self-published book called Just One Damned Thing After Another. It’s now a bestselling, wildly addictive series.