Crucible of Fire: Nineteenth-Century Urban Fires and the Making of the Modern Fire Service (Hardcover) 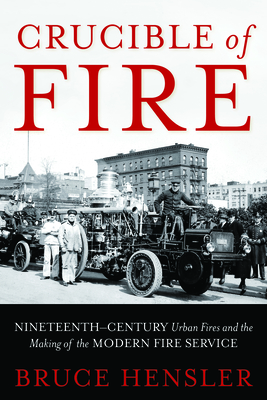 Crucible of Fire: Nineteenth-Century Urban Fires and the Making of the Modern Fire Service (Hardcover)


Available in Warehouse. Wait for Email Confirmation for ETA
Urban conflagrations, such as the Great Chicago Fire of 1871 and the Great Boston Fire the following year, terrorized the citizens of nineteenth-century American cities. However, urban rebirth in the aftermath of great fires offered a chance to shape the future. Ultimately residents and planners created sweeping changes in the methods of constructing buildings, planning city streets, engineering water distribution systems, underwriting fire insurance, and firefighting itself. Crucible of Fire describes how the practical knowledge gained from fighting nineteenth-century fires gave form and function to modern fire protection efforts. Changes in materials and building design resulted directly from tragedies such as fires in supposedly fireproof hotels. Thousands of buildings burned, millions of dollars were lost, the fire insurance industry faltered, and the nature of volunteerism changed radically before municipal authorities took the necessary actions. The great fires formed a crucible of learning for firefighters, engineers, architects, underwriters, and citizens. Veteran firefighter Bruce Hensler shows how the modern American fire service today is a direct result of the lessons of history and a rethinking of the efficacy of volunteerism in fighting fires. Crucible of Fire is an eye-opening look at today’s fire service and a thorough examination of what firefighters, civic leaders, and ordinary citizens can do to protect their homes and communities from the mistakes of the past.
Bruce Hensler is a retired veteran firefighter with over 38 years of experience and has degrees in fire science and public administration. His professional experience includes urban and suburban fire departments and senior positions as a chief fire officer and deputy director of Maine's fire service training program.
"I love this book. Crucible of Fire tells in just one well-written volume everything about the history of firefighting that until now would have required reading a hundred volumes. It also explains the necessity of reforming the mission of fire departments, while it successfully argues why the traditional bravado of interior firefighting should be reconsidered. Written by an experienced firefighter, this important book is destined to become a standard reference guide for anyone interested in the art and science of firefighting and in the profession of running a fire department. Any fire chief who does not read this book ought to think about hanging up the chief’s helmet.”—Dennis Smith, author of Report from Ground Zero and founder of Firehouse magazine

"In crisp, clear prose that is accessible to the layperson as well as the seasoned firefighting pro or buff, Bruce Hensler looks at the long history of American firefighters, celebrating their achievements while making cool, level-headed judgments about what would make their job safer. I was struck both by Hensler’s passion for the culture and tradition of firefighting and his honesty in dissecting how that culture sometimes can be counterproductive. The average citizen will learn a great deal about the mechanics of firefighting from Hensler’s descriptions, while professionals may be challenged by his blunt conclusions and prescriptions for the future."—Stephanie Schorow, author of Boston on Fire and The Cocoanut Grove Fire and editor of Boston’s Fire Trail: A Walk through the City’s Fire and Firefighting History