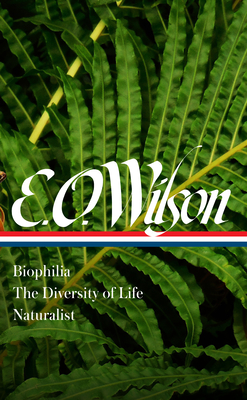 
On Our Shelves as of 9am Today
A landmark collected edition of the Pulitzer Prize-winning author and world-renowned biologist, illuminating the marvels of biodiversity in a time of climate crisis and mass extinction.

Library of America presents three environmental classics from two-time Pulitzer Prize-winner E. O. Wilson, a masterful writer-scientist whose graceful prose is equal to his groundbreaking discoveries. These books illuminate the evolution and complex beauty of our imperiled ecosystems and the flora, fauna, and civilization they sustain, even as they reveal the personal evolution of one of the greatest scientific minds of our age. Here are the lyrical, thought-provoking essays of Biophilia, a field biologist's reflections on the manifold meanings of wilderness. Here too is his magisterial, dazzlingly informative Diversity of Life: a sweeping tour of global biodiversity and a prophetic call to preserve the planet, filled on every page with little-known creatures, unique habitats, and fascinating ecological detail. Also included is Wilson's moving autobiography, Naturalist. Following him from his outdoor boyhood in Alabama and the Florida panhandle to the rainforests of Surinam and New Guinea--from his first discoveries as a young ant specialist to his emergence as a champion of conservation and rewilding--it rounds out a collection that will inspire wonder, curiosity, and love for a natural world now rapidly disappearing. Thirty-two pages of photographs and numerous illustrations accompany these works, which are introduced by David Quammen, one of America's leading science and nature writers.
One of the world's preeminent natural scientists, Edward O. Wilson (1929–2021) grew up in south Alabama and the Florida Panhandle, where he spent his boyhood exploring the region's forests and swamps, collecting snakes, butterflies, and ants--the latter to become his lifelong specialty. The author of more than twenty books, including the Pulitzer Prize winners On Human Nature (1979) and The Ants (1991), Wilson was a professor at Harvard University for more than forty years. In retirement he established the E.O. Wilson Biodiversity Foundation, which advances the "Half-Earth Project," Wilson's vision for a healed world of restored wilderness.

David Quammen, one of America's leading science and nature writers, is the author of more than a dozen books including The Song of the Dodo: Island Biogeography in an Age of Extinction (1996), Spillover: Animal Infection and the Next Human Pandemic (2012), and The Tangled Tree: A Radical New History of Life (2018). He lives in Bozeman, Montana.
"This new addition to the still expanding Library of America series (his is volume #340) presents not only the 'essential Wilson,' if you will, but also a superb introduction to some of the most significant discoveries and concepts in modern natural history—all presented in Prof. Wilson’s delightfully learned yet invitingly down-to-earth prose." —The Well-read Naturalist