Afield: A Chef's Guide to Preparing and Cooking Wild Game and Fish (Hardcover) 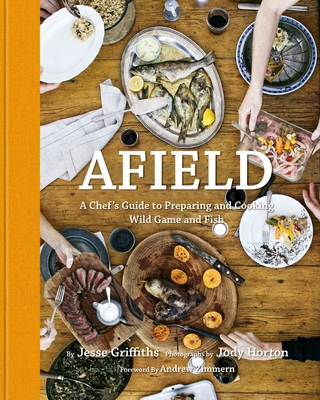 Afield: A Chef's Guide to Preparing and Cooking Wild Game and Fish (Hardcover)

Born from the principles of the local food movement, a growing number of people are returning to hunting and preparing fish and game for their home tables. Afield: A Chef's Guide to Preparing and Cooking Wild Game and Fish is at once a manifesto for this movement and a manual packed with everything the new hunter needs to know.  Wild foods, when managed responsibly, are sustainable, ethical, and delicious, and author Jesse Griffiths combines traditional methods of hunting, butchering, and preparing fish and game with 85 mouthwatering recipes.

Afield throws open the doors of field dressing for novice and experienced hunters alike, supplying the know-how for the next logical step in the local, sustainable food movement.  Stemming from a commitment to locally grown vegetables and nose-to-tail cooking, Griffiths is an expert guide on this tour of tradition and taste, offering a combination of hunting lessons, butchery methods, recipes, including how to scale, clean, stuff, fillet, skin, braise, fry and more. Fellow hunting enthusiast and food photographer Jody Horton takes you into the field, follows Griffiths step-by-step along the way and then provides you with exquisite plate photograph of the finished feasts. Filled with descriptive stories and photographs, Afield takes the reader along for the hunt, from duck and dove to deer and wild hog.

Game and fish include:
Doves, Deer, Hogs, Squirrel, Rabbits, Ducks, Geese, Turkey, Flounder, White Bass, Crabs, Catfish, and more.
Chef JESSE GRIFFITHS embodies the forefront of the new hunting-cooking movement.  He has gained national praise for his strictly local butcher shop and supper clubs (Bon Appetit, Food & Wine, Country Living, Garden & Gun) and his series of practical hunting schools are the first of their kind.  In less than a year, they have drawn students from around the country and have gained attention from The New York Times, Texas Monthly, and others. Jesse was nominated as Food & Wine's The People's Best New Chef in 2011, and is the owner and chef of Dai Due with his life/work partner, Tamara Mayfield.  The couple received Austin's Local Hero award in 2010.

"Griffiths may be an ideologue, but his recipes adapt well to the work of the unarmed home cook hoping simply to feed friends beautiful, flavorful food in the chill of early winter. His anise brine mutes the wildness in feral boar. But it also augments the flavor of commercially raised pigs, increases the clarity of their flavor, acts as the best sort of kitchen cheat."
— Sam Sifton, "How to Tame a Wild Pork Chop" featured in The New York Times Magazine
"I don't really see myself plucking doves anytime soon—rather I tend to feed them—but I greatly admire Jesse Griffiths and his work, especially Afield. It's solid and real, not something stylish and trendy. It's clear that Jesse takes this work very seriously. That would be enough, but I have to add that the photographs are especially evocative."
—Deborah Madison, author of Vegetarian Cooking for Everyone and Local Flavors

"After the Larousse Gastronomique, this book will become my new bible. Afield is part of the new generation of culinary books. Actually, it's more than just a culinary book, it's a North American chef d'oeuvre. Enjoy!"
—Martin Picard aka "The Wild Chef," author of Au Pied de Cochon Sugar Shack

"A kindred spirit and fellow hunter, angler and cook, Jesse Griffiths has created a book that not only highlights the glories of Texas' abundant game and fish, but is also just as relevant and as useful wherever you can find doves and deer, crabs and crappies. It is one of a very few modern cookbooks that does justice to America's wild game and fish."
—Hank Shaw, author of Hunt, Gather, Cook

"Jesse Griffiths practices what most of us only preach when it comes to sustainable eating. Afield shows us that hunting is as much about compassion, respect and knowledge of animals, and the land as it is about the preparation. Much praise goes to Jesse for making the art of hunting and cooking game approachable."
—Carla Hall, co-host of The Chew

"From his love of hunting and fishing, Jesse Griffiths has created a rare and beautiful book."
—April Bloomfield, chef and author of A Girl and Her Pig

Advance Praise "Of all the members of The Butcher's Guild, Jesse is one of the most intrepid and iconoclastic. Gracefully teaching sustainability and holistic cooking in Texas, he has become the young grandaddy to a new generation of chefs and butchers. His prose and approach are as warm as a campfire on a Texas dove-hunt."
—Marissa Guggiana, author of Primal Cuts and Off the Menu; co-founder of The Butcher's Guild

"The recipes are spot-on (I cook; my son is a chef), the photography is gorgeous, and the philosophy is a welcome breath of non-self-righteous rationalization."
—James R. Babb, Editor, Gray's Sporting Journal

"This book is inspiring. Jesse captures the energy of the hunter gatherer in a refined and approachable way. This book makes me want to eat Snipe and smoke my own catfish."
—Jamie Bissonnette, chef and butcher at Coppa and Toro in Boston

"Jesse Griffiths knows what's important about food...that it's fresh, local and allowed to speak for itself. He's an old school chef with deep respect for the land, his farmers and purveyors and the food they produce and it shows through his cooking."
—Dave Pasternack aka "The Fish Whisperer," according to the New York Times; author of A Young Man and the Sea

"The magic, and why I think Afield is a special work, is that it fully portrays a way of living and thinking that allows us to return to a more simple way to be measured and respected. And it does so without lecturing or pandering. It reminds me that by living a more principled life, I can make my world a better place and I can use food and cooking to do it. This book is a beautiful piece of work, and after you read it, and cook from it, please get outside and get dirty with it. Wherever you are, the great outdoors is waiting for you, afield."
—Andrew Zimmern, host of Bizarre Foods, from his introduction to Afield (Andrew featured Griffiths breaking down a feral hog on the Bizarre Foods Austin episode that aired on August 13, 2012)

"It's not news that we're rethinking how we eat. Between money issues, and the conglomeration of differing ideas about where we should get our food and what we should do with it, I'm surprised we've not seen a book like Afield before now. Then again we've not had a Jesse Griffiths stepping forward before now. With this book he reaches beyond those who have always hunted. He lives that idea of working with what is around you and hunting naturally comes out of that for him. Hunting is not for all of us, but this book has much to teach about working with meat, cooking game well, and for some us, it offers a gentle, thoughtful introduction to a way with food that seemed foreign in the past. It could be a marker for the future."
—Lynne Rossetto Kasper, host of public radio's national food show, The Splendid Table®, from American Public Media (Griffiths' segment will air in mid-September)

"If things get tough on Planet Earth, you'll want Jesse Griffiths at your side, or at least, his educational and entertaining book, Afield! Read Jesse Griffiths' Afield for inspiration, and then get out to the wilderness and bring home a wild hog, or at least a few fish! Then flip through the pages of this beautiful book to learn what to do with your catch. Jesse Griffiths is an omnivore's inspiration — one of Texas' greatest supporters of and educators on local foods of every kind — he's just as good with vegetables as he is with game. Afield is Jesse Griffiths and his cohorts at their finest. If you don't have a gun or a fishing pole, just delve into Afield for a great armchair experience!"
—Carol Ann Sayle, organic vegetable farmer, Boggy Creek Farm, Austin, TX


“Griffiths takes you inside the moment with him, into his head, as he searches for a downed doe or sets the hook in a catfish’s mouth. It’s impossible to miss Griffiths’ reverence for the lives he literally consumes.”
—Kim Pierce, Dallas Morning News

“Everything you want to know about hyper-locavorism can be found in this book of stories, recipes and how-tos that will take you from couch potato to wild boar hunter in no time. Well...maybe a little time.”
—Jesse Kapadia, Food Republic

“Lots of the recipes - for turkey, duck, fish, crab, and rabbit in particular - could be happily used by cooks with no intention of actually harvesting it themselves from anywhere but the butcher shop.”
—Molly Watson, About.com

“Calling Afield a mere cookbook would be…like calling the Grand Canyon a large ditch. A philosophical journal, a field guide, a visual work of art – all of these would be fitting descriptions of the new book. Half of [the photographs] will inspire you to never eat anything processed again, while the other half will make you want to grab your rod or gun and head out into the wild right away.”
—Bearings: A Southern Lifestyle for Men

“Afield is at once anecdotal and educational… In a country where gun ownership is more associated with NRA zealots than food sourcing, Griffiths wants to open up people’s minds to living off the land once again.”
—Veronica Meewes, CultureMap Austin

“Afield will inspire you to do—to roll up your sleeves and catch a flounder, clean a rabbit, field dress a feral hog, butcher a deer, cook up a squirrel, and make your own sausage—all in the name of a good meal.”
—Sarah Hebbel-Stone, FarmPlate

“Yes, it’s a cookbook, but more specifically, it’s an impeccably written, extensively photographed manual that takes people through the hunting process from land, lake, and sea and right back into the home kitchen.”
—Layne Lynch, Texas Monthly

"For a reader who knows the magic of a duck blind at sunrise, the writing is evocative; for the novice, it offers additional insight into why hunting and fishing are favored pastimes for millions in this country."
—Kerry Luft, Chicago Tribune

"Griffiths forges a new approach to the sustainable movement through a compelling narrative on the benefits, both mental and physical, to catching your own dinner."
—Michele Harris, Erickson Tribune

“A practitioner of the new hunting-cooking movement, Griffiths also happens to be a gifted writer who captures the drama and romance of moving through a creek slowly so as not to spook the fish or gutting and scaling whiting directly into Gulf waves while surf fishing… [It’s] Hemingway-esque.”
—Greg Morago, Houston Chronicle

“[Afield] is one of the better game cookbooks in recent years, equally accessible to avid hunters and fishermen and those who are just starting out, as well as those who are debating whether to begin.”
—Kerry Luft, Latino Times

“We have come a long way from our days as hunter-gatherers, yet there is still deep satisfaction in catching a fish and cooking it yourself…Jesse Griffiths has tapped into that primordial urge.”
—Michael Hoinski, Texas Monthly