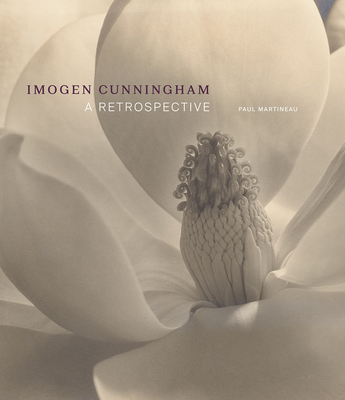 By Paul Martineau , Susan Ehrens (Contributions by)
List Price: $55.00
Our Price: $50.00
(Save: $5.00 9%)
On Our Shelves as of 9am Today
Thoroughly researched and beautifully produced, this catalogue complements the first comprehensive retrospective in the United States of Imogen Cunningham’s work in over thirty-five years.

Celebrated American artist Imogen Cunningham (1883–1976) enjoyed a long career as a photographer, creating a large and diverse body of work that underscored her unique vision, versatility, and commitment to the medium. An early feminist and inspiration to future generations, Cunningham intensely engaged with Pictorialism and Modernism; genres of portraiture, landscape, the nude, still life, and street photography; and themes such as flora, dancers and music, hands, and the elderly.

Organized chronologically, this volume explores the full range of the artist’s life and career. It contains nearly two hundred color images of Cunningham’s elegant, poignant, and groundbreaking photographs, both renowned and lesser known, including several that have not been published previously. Essays by Paul Martineau and Susan Ehrens draw from extensive primary source material such as letters, family albums, and other intimate materials to enrich readers’ understanding of Cunningham’s motivations and work.

Paul Martineau has been a curator of photographs at the J. Paul Getty Museum for over fifteen years. Among the many books he has authored are Icons of Style: A Century of Fashion Photography (2018), Robert Mapplethorpe: The Photographs (2016), Minor White: Manifestations of the Spirit (2014), and Herb Ritts: L.A. Style (2012), all from Getty Publications.

Susan Ehrens, the author of The Errand of the Eye: Photographs by Rose Mandel (2013), A Poetic Vision: The Photographs of Anne Brigman (1995), and Alma Lavenson: Photographs (1990), organized and cocurated the exhibition The Photography of Imogen Cunningham: A Centennial Selection.
“A rare complete picture of Cunningham’s oeuvre.”
—Alex Greenberger, ARTnews


“This retrospective . . . remind[s] us what a beloved, tough, industrious, and supremely independent photographer and person Cunningham was.”

“The scholarly research that informs the text offers many surprises.”

“Few women chose to become photographers at the beginning of the 20th century, yet Cunningham’s images—from female nudes to Hollywood portraits—smoothed the way for countless female artists that followed.”

“With “Imogen Cunningham: A Retrospective” (Getty, 245 pages, $50), editor Paul Martineau means to fix Cunningham’s place in the firmament of great 20th-century American photographers. For over 70 years, Cunningham (1883-1976) innovated and excelled in many photographic genres. Her portraits, a reviewer in 1913 said, are “a portrayal of the sitter’s personality, spirituality—soul, if you will—which gives the beholder a sense of actual presence.” While homebound taking care of her three young boys she photographed the plants in her garden, and what was said about her portraits also applies to her photographs of flora. She is one of the few to take successful nudes of both women and men. The book includes her intense “Martha Graham, Dancer” (1931), her celebrated “Magnolia Blossom” (1925) and the still startling nude “Triangles” (1928).”

“This standout offering impresses on every page.”

“These days, high modernism can sometimes look as distant as a faraway star, a place of heedless optimism and tranquil contemplation. For that very reason, though, the images can be tonic, lowering one’s blood pressure as they induce concentration of sight. Imogen Cunningham took up a camera at the dawn of the 20th century, when few women were working in the field, and made pictures for nearly seven decades. She took every sort of photo; portraits, street scenes and landscapes all figure brilliantly in her body of work. What she did best, though, was to convey the sensual impact of harmonious forms, finding these especially in nudes, both male and female, and in the vegetable kingdom. Imogen Cunningham: A Retrospective, by Paul Martineau, displays her ecstatic studies of flowers—lilies, tuberoses, magnolias—seen in extreme close-up as if they were worlds in themselves, and juxtaposes them with languorous sprawled bodies that become dunes and arroyos. She can turn her eye with similar entrancement to ceramics, textiles, the organically flowing wire sculptures of Ruth Asawa, and even industrial structures. She has never been granted anywhere near the attention accorded her counterpart and contemporary Edward Weston, but revision is clearly in order.”

“Imogen Cunningham’s name may not come immediately to mind when you think about the great American photographers, but a new book, the catalog for a planned but temporarily postponed exhibition at LA’s J. Paul Getty Museum, could make you think again. . . . Paul Martineau’s Imogen Cunningham: A Retrospective (Getty) makes it very clear that she belongs in the photo pantheon alongside her Bay Area colleagues Edward Weston and Dorothea Lange.”

“Does proper justice to her powerful and varied works.”