Under Discussion: The Encyclopedic Museum (Paperback) 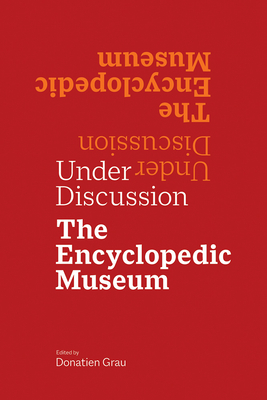 Under Discussion: The Encyclopedic Museum (Paperback)


Available in Warehouse. Wait for Email Confirmation for ETA
In almost thirty interviews, Donatien Grau probes some of the world’s most prominent thinkers and preeminent arts leaders on the past, present, and future of the encyclopedic museum.

Over the last two decades, the encyclopedic museum has been criticized and praised, constantly discussed, and often in the news. Encyclopedic museums are a phenomenon of Europe and the United States, and their locations and mostly Eurocentric collections have in more recent years drawn attention to what many see as bias. Debates on provenance in general, cultural origins, and restitutions of African heritage have exerted pressure on encyclopedic museums, and indeed on all manner of museums. Is there still a place for an institution dedicated to gathering, preserving, and showcasing all the world’s cultures?

Donatien Grau’s conversations with international arts officials, museum leaders, artists, architects, and journalists go beyond the history of the encyclopedic format and the last decades’ issues that have burdened existing institutions. Are encyclopedic museums still relevant? What can they contribute when the Internet now seems to offer the greater encyclopedia? How important is it for us to have in-person access to objects from all over the world that can directly articulate something to us about humanity? The fresh ideas and nuances of new voices on the core principles important to museums in Dakar, Abu Dhabi, and Mumbai complement some of the world’s arts leaders from European and American institutions—resulting in some revealing and unexpected answers. Every interviewee offers differing views, making for exciting, stimulating reading.


Donatien Grau is a scholar and author. He currently serves as head of contemporary programs at the Musée d’Orsay, Paris, and as chair of the Association Pierre Guyotat.
“An interesting opportunity to listen in on the thinking of prominent figures in the field, Under Discussion: The Encyclopedic Museum offers a birds-eye view of their renegotiation of a legacy of the European Enlightenment to serve twenty-first-century populations across the globe.”
— Bernard Zirnheld

“Grau’s compilation of interviews essentially asks us not simply to rebuild, reorganize, or reconfigure the encyclopedic museum, but to conceptually reimagine such museums and their place in a globalized civilization divided into contentious nation-states.”
— Ezrha Jean Black