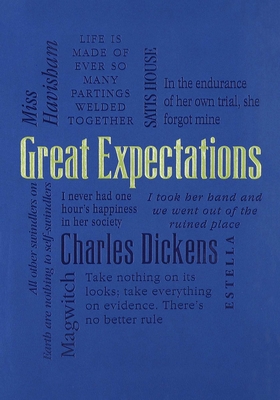 
On Our Shelves as of 9am Today
No home library is complete without the classics! Great Expectations is a keepsake to be read and treasured.

One of the most popular novelists ever, Charles Dickens wrote about what he saw in 19th century London: orphans, child labor, and the crime that was rampant in the city at the time. In the 1861 bestseller Great Expectations, he wove all of these themes into a tale of mystery and personal development. The story of a young orphan boy—poor and alone, but whisked away to London by a anonymous benefactor—is a fantastic tale, complete with plot twists and a love story that puts many modern novels to shame. To this day, Great Expectations remains one of Dickens’s greatest achievements. Now available as part of the Word Cloud Classics series, the novel is a must-have addition to the libraries of all classic literature lovers.

About the Word Cloud Classics series:

Classic works of literature with a clean, modern aesthetic! Perfect for both old and new literature fans, the Word Cloud Classics series from Canterbury Classics provides a chic and inexpensive introduction to timeless tales. With a higher production value, including heat burnished covers and foil stamping, these eye-catching, easy-to-hold editions are the perfect gift for students and fans of literature everywhere.
Born on February 7, 1812, Charles Dickens is one of the most popular literary authors of all time. After a very tumultuous childhood, Dickens finally succeeded in getting his first story in a London periodical. As the number of his published works increased, so did his fame. Although he died in 1870, Dickens works are some of the most famous written works in the English language.