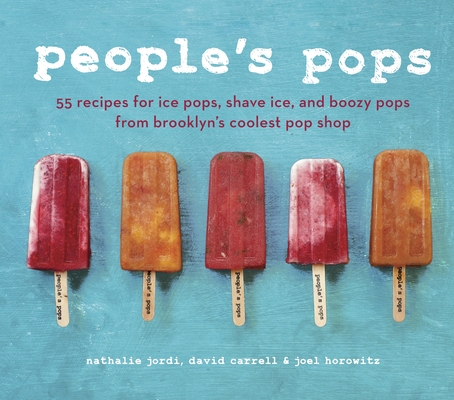 
Available in Warehouse. Wait for Email Confirmation for ETA
A flavor-packed collection of 65 recipes from the trio behind the premier pops stand in the country, People’s Pops.

In 2008, three old friends had a hunch that the world deserved a better ice pop. Every summer since, New York City’s been taken by storm with out-of-the-box flavors like Raspberries & Basil, Peach & Bourbon, and Cantaloupe & Tarragon from People’s Pops. Now, the People behind the phenomenon share their DIY ethos in a breezy cookbook that teaches how to pair ingredients, balance sweetness, and explore fruits (and vegetables and herbs!)--in simple recipes that work with standard ice pop molds or improvised ones. With a chapter devoted to shave ice plus recipes for grownup boozy pops sprinkled throughout, People’s Pops proves itself top of the pops.
Joel Horowitz, Nathalie Jordi, and David Carrell founded People’s Pops in 2008. They live in Brooklyn, New York.

“All you need is an ice-pop mold and sticks, a food processor and some simple syrup, and your summer will thank you.”
—New York Times Book Review

“Power to the People’s Pop! These ice pops are my favorite food on a stick.”
—Rachael Ray