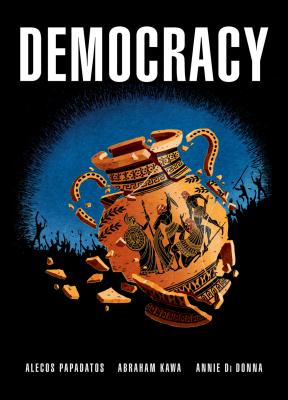 Democracy opens in 490 B.C., with Athens at war. The hero of the story, Leander, is trying to rouse his comrades for the morrow's battle against a far mightier enemy, and begins to recount his own life, having borne direct witness to the evils of the old tyrannical regimes and to the emergence of a new political system. The tale that emerges is one of daring, danger, and big ideas, of the death of the gods and the tortuous birth of democracy. We see that democracy originated through a combination of chance and historical contingency--but also through the cunning, courage, and willful action of a group of remarkably talented and driven individuals.

Alecos Papadatos and Annie DiDonna, artists behind the international phenomenon Logicomix, together with writer Abraham Kawa, deliver a graphic novel bursting with extraordinary characters and vibrant color, one that also offers fresh insight into how this greatest of civic inventions came to be.

Alecos Papadatos has worked as a film animator, director, and storyboarder, and creates cover art for books and periodicals. He spent five years drawing Logicomix, which became an international phenomenon. He lives in Athens, Greece.

Abraham Kawa is a writer and cultural studies theorist in Greece. His academic work focuses on graphic novels, cinema, and genre fiction.

Annie Di Donna has been an animator on many international productions. She works as an art director and colorist for graphic novels.

"For all that Democracy wrestles with history and politics and these weighty matters, the story is accessible, entertaining and personal, and full of gods, action, romance and more. It’s fun, it’s heartbreaking, it’s thought-provoking, and it’s tragic—and it’s absolutely one of the greatest graphic novels I expect to read all year." —io9

"Each individual element wonderfully serves the whole. The look and feel of Papadatos’ art is such a huge part of what has been accomplished here that it must not only be commended, its many virtues must be recommended for repeated viewings, for studying, for close-up, detailed scanning, and for pulling back and taking in whole pages, sometimes two facing pages working together as one . . . Papadatos has animated, storyboarded, and directed in film. His cinematic talents are powerfully on display here . . . In any library of great graphic novels, Democracy can rightfully be placed on the shelf with Art Spiegelman’s Maus and Marjane Satrapi’s Persepolis. Indeed, in any library of fine books of any kind, Democracy can be proudly added." —New York Journal of Books

"An incisive and entertaining visual history of the roots of democracy. This journey is a saga comparable to epics such as Frank Miller’s 300 and Eric Shanower’s Age of Bronze, with a touch of Jack Kirby’s wondrous mythological civilizations . . . Papadatos’s lively and energetic art illuminates battles, alliances, political machinations, and vivid personalities, and Di Donna’s intense coloring is gloriously rich . . . Like Logicomix, this is a brilliantly realized stealth education." —Publishers Weekly (starred review)

"Blending big ideas, dialectic tussles and absorbing narrative . . . Democracy offers a visual treat as much as an intellectual feast. Its artwork slides fluidly between domestic scenes, civic debate, supernatural commentary (Athena, Apollo and Dionysus have speaking parts), and Hollywood-style climaxes . . . The authors have fashioned not a dry civics lesson but an unfinished epic drama." —Independent

"This graphic historical novel from the authors of the hit Logicomix details the birth of democracy in war-torn Greece 2,500 years ago." —2015 Holiday Gift Guide, LA Times